Water is the most abundant yet least understood liquid in nature. It exhibits many strange behaviors that scientists still struggle to explain. While most liquids get denser as they get colder, water is most dense at 39 degrees Fahrenheit, just above its freezing point. This is why ice floats to the top of a drinking glass and lakes freeze from the surface down, allowing marine life to survive cold winters. Water also has an unusually high surface tension, allowing insects to walk on its surface, and a large capacity to store heat, keeping ocean temperatures stable.

Now, a team that includes researchers from the Department of Energy’s SLAC National Accelerator Laboratory, Stanford University and Stockholm University in Sweden have made the first direct observation of how hydrogen atoms in water molecules tug and push neighboring water molecules when they are excited with laser light. Their results, published in Nature today, reveal effects that could underpin key aspects of the microscopic origin of water’s strange properties and could lead to a better understanding of how water helps proteins function in living organisms.

“Although this so-called nuclear quantum effect has been hypothesized to be at the heart of many of water’s strange properties, this experiment marks the first time it was ever observed directly,” said study collaborator Anders Nilsson, a professor of chemical physics at Stockholm University. “The question is if this quantum effect could be the missing link in theoretical models describing the anomalous properties of water.”

Each water molecule contains one oxygen atom and two hydrogen atoms, and a web of hydrogen bonds between positively charged hydrogen atoms in one molecule and negatively charged oxygen atoms in neighboring molecules holds them all together. This intricate network is the driving force behind many of water’s inexplicable properties, but until recently, researchers were unable to directly observe how a water molecule interacts with its neighbors.

“The low mass of the hydrogen atoms accentuates their quantum wave-like behavior,” said collaborator Kelly Gaffney, a scientist at the Stanford Pulse Institute at SLAC. “This study is the first to directly demonstrate that the response of the hydrogen bond network to an impulse of energy depends critically on the quantum mechanical nature of how the hydrogen atoms are spaced out, which has long been suggested to be responsible for the unique attributes of water and its hydrogen bond network.”

Until now, making this observation has been challenging because the motions of the hydrogen bonds are so tiny and fast. This experiment overcame that problem by using SLAC’s MeV-UED, a high-speed “electron camera” that detects subtle molecular movements by scattering a powerful beam of electrons off samples.

The research team created 100-nanometer-thick jets of liquid water ­– about 1,000 times thinner than the width of a human hair – and set the water molecules vibrating with infrared laser light. Then they blasted the molecules with short pulses of high-energy electrons from MeV-UED.

This generated high-resolution snapshots of the molecules’ shifting atomic structure that they strung together into a stop-motion movie of how the network of water molecules responded to the light.

The snapshots, which focused on groups of three water molecules, revealed that as an excited water molecule starts to vibrate, its hydrogen atom tugs oxygen atoms from neighboring water molecules closer before pushing them away with its newfound strength, expanding the space between the molecules.

“For a long time, researchers have been trying to understand the hydrogen bond network using spectroscopy techniques,” said Jie Yang, a former SLAC scientist and now a professor at Tsinghua University in China, who led the study. “The beauty of this experiment is that for the first time we were able to directly observe how these molecules move.”

A window on water

The researchers hope to use this method to gain more insight into the quantum nature of hydrogen bonds and the role they play in water’s strange properties, as well as the key role these properties play in many chemical and biological processes.

“This has really opened a new window to study water,” said Xijie Wang, a SLAC distinguished staff scientist and study collaborator. “Now that we can finally see the hydrogen bonds moving, we’d like to connect those movements with the broader picture, which could shed light on how water led to the origin and survival of life on Earth and inform the development of renewable energy methods.”

MeV-UED is an instrument of the LCLS user facility, operated by SLAC on behalf of the DOE Office of Science, which funded this research.

In a first, scientists capture a ‘quantum tug’ between neighboring water molecules 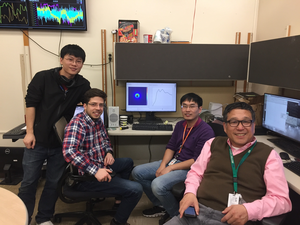 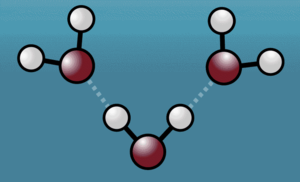