Picture a skunk. You’re probably thinking of a stocky animal, around the size of a housecat, black with white stripes, like Pepé Le Pew. That describes North America’s most common skunk, the striped skunk, but they also have smaller, spotted cousins. Scientists still have a lot to learn about spotted skunks, starting with how many kinds of them even exist—over the years, the number of recognized species has ranged from two to fourteen, and lately, scientists have agreed there are four. But in a new paper in Molecular Phylogenetics and Evolution, researchers analyzed skunk DNA and found that there aren’t four species of spotted skunk after all: there are seven.

Skunks, like raccoons, otters, and weasels, are part of the Carnivora order of mammals (they’re omnivores, though). They’re distantly related to dogs, and even more distantly related to cats. Spotted skunks are found throughout North America, but they haven’t made themselves at home in urban areas the way their striped cousins have. Most spotted skunks weigh less than two pounds, whereas striped skunks can tip the scales at over ten. Like their name suggests, they have spots instead of stripes (although technically they’re just broken stripes). And while all skunks produce a nasty-smelling spray to deter predators, spotted skunks have the flashiest means of deploying it: they do a hand-stand on their front legs as an extra warning before they spray. “Spotted skunks are sometimes called the acrobats of the skunk world,” says Ferguson.

Scientists have been interested in spotted skunks for a long time—the first species formally recognized by Western science was described in 1758 by Carl Linnaeus, the inventor of the biological naming system still used today. Over the years, as many as fourteen species were recognized, though in recent decades that number’s been condensed to four. However, Ferguson suspected that there might be more, due to the lack of genetic sequence data from morphologically distinct or geographically isolated populations of this wide-ranging genus. “We figured there had to be some surprises when it came to spotted skunk diversity, because the genus as a whole had never been properly analyzed using genetic data,” says Ferguson.

Even though North American carnivores are by and large well-known, skunks are often understudied, in part because catching skunks is a good way to get sprayed. On top of that, spotted skunks are lithe and good at climbing trees, and they’re usually found in remote areas. To acquire the specimens needed for the study, the researchers had to get creative.

“We made wanted posters that we distributed across Texas in case people trapped them or found them as roadkill,” says Ferguson, who began collecting specimens used in this project while working on his MSc at Angelo State University. “People recognize spotted skunks as something special, because you don’t see them every day, so they’re not the kind of roadkill that people just paint over.”

In addition to modern specimens, the scientists used skunks in museum collections. “If we’re trying to tell the full story of skunk evolution we need as many samples as we can,” says Ferguson. “For example, we didn’t have any modern tissues from Central America or the Yucatan. We were able to use museum collections to fill those holes.” All in all, the researchers amassed a collection of 203 spotted skunk specimens.

“I was able to extract DNA from century-old museum samples and it was really exciting to see who those individuals were related to. It turns out that one of those was a currently unrecognized, endemic species in the Yucatan,'' says Molly McDonough, a biology professor at Chicago State University, research associate at the Field Museum, and the paper’s first author.

Among the new species described are the Yucatan spotted skunk, a squirrel-sized skunk found only in the Yucatan Peninsula, and the Plains spotted skunk. Plains spotted skunks have been in decline for the past century, and conservationists have petitioned for them to be listed as an endangered subspecies. “If a subspecies is in trouble, there’s sometimes less emphasis on protecting it because it's not as distinct an evolutionary lineage as a species,” says Ferguson. “We’ve shown that the Plains spotted skunks are distinct at the species level, which means they've been evolving independently of the other skunks for a long time. Once something has a species name, it's easier to conserve and protect.”

The revised skunk family tree could also be a tool for scientists looking to understand skunk reproductive biology. “Besides the fact that they do handstands, the coolest thing about spotted skunks is that some of them practice delayed egg implantation—they breed in the fall, but they don’t give birth until the spring. They delay implanting the egg in the uterus, it just sits in suspension for a while,” says Ferguson. “We want to know why some species have delayed implantation and others don’t, and figuring out how these different species of skunks evolved can help us do that.”

And while skunks aren’t always the most popular animals, the researchers say that understanding how they evolved and protecting them from extinction is important to our whole ecosystem.

“By analyzing the genome of spotted skunks, we’ve been able to learn that their evolution and splitting into different species was driven by climate change during the Ice Age,” says Ferguson. “The different lineages we found might help us find different conservation angles for protecting them in the future.”

Doubling the number of species of hand-standing spotted skunks 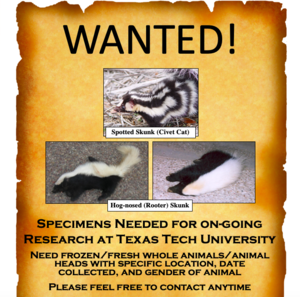 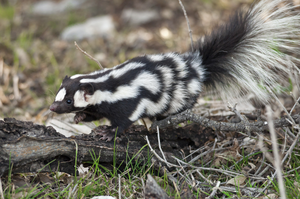 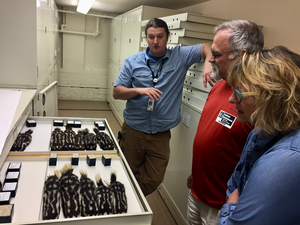