Ithaca, NY—New research on the glittering White-necked Jacobin hummingbird reveals nearly 20% of the species’ adult females have male-like plumage. This strategy is all about dodging bullies and getting better access to food. The findings were published today in the journal Current Biology. [LINK]

"What's interesting about the White-necked Jacobin is that all the juveniles start out with male-like plumage," explains lead author Jay Falk. "Among most other bird species, juvenile plumage looks more like the female's, presumably to be less obvious to predators." Falk did this work while a Ph.D. student with the Cornell Lab of Ornithology and is currently at the University of Washington.

As the birds mature, all the jacobin males retain the fancier plumage but so do nearly 20% of the females among the population Falk studied in Panama. The remaining 80% of females still develop the muted green and white coloration of a typical adult female. Though plumage ornamentation is usually attributed to sexual selection and attracting a mate, researchers ruled out that explanation for this species after field experiments.

Funding for this research was provided by the Cornell Lab of Ornithology, the Smithsonian Tropical Research Institute, the National Science Foundation, the Society for the Study of Evolution, the American Society of Naturalists, and the Sigma Xi Society.

"If females having male-like plumage is the result of sexual selection, then the males would have been drawn to the male-plumaged females," says Falk. "That didn’t happen. The male White-necked Jacobins still showed a clear preference for the typically plumed adult females."

So, what's the benefit to females of this species when they look like a male? To get to the root of that puzzle, Falk and his assistants put radio frequency ID tags on birds and set up a circuit of 28 feeders wired to read the tags. By tracking the number and length of visits, they honed in the answer.

"Our tests found that the typical, less colorful females were harassed much more than females with male-like plumage," Falk says. "Because the male-plumaged females experienced less aggression, they were able to feed more often—a clear advantage."

The researchers found that the male-like females got to feed longer than the typical adult female—about 35% longer at feeders filled with high-sugar nectar. That can make a big difference because hummingbirds have the highest metabolic rate of any vertebrate. They need to eat constantly in order to survive.

Bottom line: female White-necked Jacobins retain the male-like plumage of their youth for social reasons—they avoid the bullies by looking like them. It is still not clear whether male-like females behave just as aggressively as the males. The actual physical mechanism that allows females to retain male-like plumage is also not known.

Editors: Download images, artwork, and video. The use of this material is protected by copyright. Use is permitted only within stories about the content of this release. Redistribution or any other use is prohibited without express written permission of the Cornell Lab of Ornithology or the copyright owner.

Some hummingbird females look like males to evade harassment 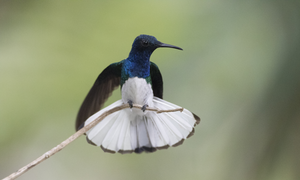 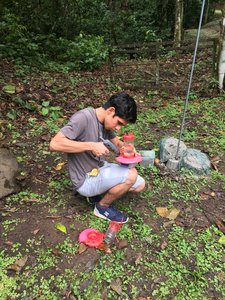