Over our long shared history, dogs have developed a range of skills for bonding with human beings. Their ability to make sense of human actions, demonstrated by every “sit,” “lay down,” and “roll over,” is just one such skill. But whether dogs understand human intentions, or merely respond to outcomes, remains unclear. The ability to recognize another’s intentions – or at least conceive of them – is a basic component of Theory of Mind, the ability to attribute mental states to oneself and others, long regarded as uniquely human. Do dogs have this basic component of Theory of Mind, the ability to tell the difference between something done on purpose and something done by accident?

To answer this question, a team of researchers in Germany conducted an experiment that examined how dogs reacted when food rewards were withheld, both intentionally and unintentionally. They found that dogs respond differently depending on whether the actions of the experimenter were intentional or unintentional. This, the researchers say, shows that dogs can distinguish between actions that were done on purpose or accidentally.

To reach their conclusions, the researchers conducted an experiment using the “unable vs. unwilling” paradigm. This works by examining whether test subjects react differently towards a human experimenter who either intentionally (the unwilling condition) or unintentionally (the unable condition) withholds rewards from them. Despite being an established paradigm in studies of human and animal cognition, the unable vs. unwilling paradigm had never been previously used to investigate dogs.

“If dogs are indeed able to ascribe intention-in-action to humans,” says Dr. Juliane Bräuer, “we would expect them to show different reactions in the unwilling condition compared to the two unable conditions. As it turns out, this is exactly what we observed.”

Not only did the dogs wait longer in the unwilling condition than in the unable conditions, they were also more likely to sit or lie down – actions often interpreted as appeasing behaviours – and stop wagging their tails.

“The dogs in our study clearly behaved differently depending on whether the actions of a human experimenter were intentional or unintentional,” says Britta Schünemann, the first author of the study. “This suggests that dogs may indeed be able to identify humans’ intention-in-action,” adds Hannes Rakoczy from the University of Göttingen.

The team acknowledges that their findings may be met with scepticism and that further study is needed to address alternative explanations, such as behavioural cues on the part of experimenters or knowledge transfer from prior dog training.

“Nevertheless,” the paper concludes, “the findings present important initial evidence that dogs may have at least one aspect of Theory of Mind: The capacity to recognize intention-in-action.” 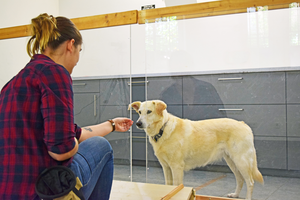 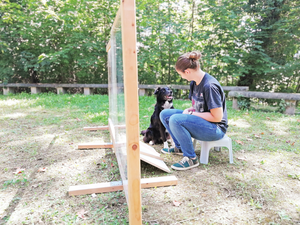