David Sela, a nutrition scientist at the University of Massachusetts Amherst, has received a five-year, $1.69 million grant from the National Institutes of Health (NIH) to investigate how nitrogen in human milk is used by beneficial microbes in the infant gut to potentially play an important role in pediatric nutrition and development.

The new experiments, funded by the NIH’s National Institute of Child Health and Human Development, may also yield molecular targets to diagnose and intervene to improve nitrogen metabolism efficiency through the microbiome in infants and possibly adults.

It was once thought that the nutrients and bioactives in human milk were transferred directly to the nursing infant in a linear manner, explains Sela, associate professor of food science and director of the Fergus M. Clydesdale Center for Foods for Health and Wellness.

“Now there is considerable evidence that human milk directs early establishment of the microbiome through molecules, such as oligosaccharides, that modulate specific microbial populations to impact infant health and wellness,” Sela says.

In the Sela Lab, Sela and his team study Bifidobacterium infantis, a beneficial bacterium that colonizes babies’ guts. “This particular microbe has a close relationship with the infant and it utilizes mother’s milk products, including those that the babies don’t digest but would otherwise pass through their body,” Sela says.

Sela’s early work identified that some of the microbe’s genes are related to urea hydrolysis, which made Sela pause and think. “Urea is a waste product in humans. Why do we see so much urea in breast milk? We put two and two together, and I came up with a hypothesis that actually this microbe has another connection with human milk: it’s utilizing this waste product as a nitrogen source.”

This urea nitrogen salvaging is known to be important in ruminant animals and may be a key feature of the interactions between the infant and microbiome. “It may be of critical importance to infants in general or in certain nutritional contexts,” Sela says.

Those questions and hypotheses will guide and inform Sela’s new research, which will feature experiments to understand both the details and the big picture.

“We want to have an understanding of the system by which nitrogen and metabolism is intertwined between mom’s diet, mom’s breast milk and the infant’s needs, as well as how the microbes contribute to infant nitrogen metabolism,” Sela says. “We want to characterize mechanistically what is going on within the microbes themselves. We’re trying to reduce the system into its components and then paint the larger picture once we understand the smaller aspects of it,” Sela says.

Down the line, if researchers are able to confirm that urea nitrogen salvaging is important to infant nutrition and development, then they will focus on potential interventions if it would benefit infant outcomes. Those interventions could include nutritional supplements for mother or infant, including probiotics, and addressing other aspects of maternal lifestyle.

“These are the open questions that we’re hoping to solve in the next few years,” Sela says. 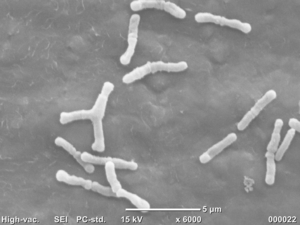