The findings offer a new paradigm for understanding the functional and regulatory role that inflammasome sensors and cell death complexes play in infections. The work also highlights new therapeutic targets for treatment of diseases such as cancer and inflammatory autoimmune disorders that are associated with abnormal inflammasome sensor activation.

Inflammasomes are protein complexes that form in infected cells or cells that sense damage. The complexes include sensors that recognize different viruses, bacteria and other pathogens or danger signals. Inflammasomes drive inflammatory signaling. Those signals activate inflammatory cell death pathways and eliminate the infection but can also contribute to pathological inflammation. Previous research has focused on inflammasomes working alone.

“This new work builds on our quest to identify inflammasome regulation,” said corresponding author Thirumala-Devi Kanneganti, Ph.D., of the St. Jude Department of Immunology. “Our study highlights how inflammasomes and multiple cell death components can and do work together in a mega-protein complex called the PANoptosome to activate the innate immune response and unleash PANoptosis.”

The Kanneganti laboratory showed that regulatory and molecular interactions among three inflammasome sensors, in concert with cell death proteins, drive formation of a mega-cell death complex called a PANoptosome. Rather than regulating one type of inflammatory programmed cell death, PANoptosomes control three - pyroptosis, apoptosis and necroptosis, referred to as PANoptosis.

Investigators also determined that the AIM2 inflammasome sensor served as a master regulator of PANoptosome assembly in response to infections with herpes simplex virus 1 and the Francisella novicida bacterium. AIM2 also proved essential for helping mice survive the infections.

“The findings address a central question in the fields of innate immunity, cell death and inflammasome biology,” Kanneganti said.

The findings build on previous research from Kanneganti’s laboratory, which is a pioneer in the field. Kanneganti identified one of the first inflammasome sensors and helped to establish inflammasome research.

Researchers in the field have focused on how individual inflammasome sensors detect invading pathogens or other threats. Inflammasomes were historically thought to respond by activating one inflammatory cell death pathway.

The Kanneganti laboratory has a longstanding interest in understanding regulation of inflammasomes and have identified redundancies among cell death pathways. In 2016, the researchers reported for the first time that influenza infections activated molecules in all three cell death pathways. The scientists called the process PANoptosis. Investigators also determined that a single innate immune sensor called ZBP1 regulated PANoptosis in flu-infected cells. This study laid the foundation for the development of the PANoptosis research area.

PANoptosomes today Now, Kanneganti’s group has identified AIM2 as the master regulator of a new PANoptosome. First author SangJoon Lee, Ph.D., a postdoctoral fellow in the Kanneganti laboratory, used immunoprecipitation, microscopy and other techniques to show that AIM2, other inflammasome sensors Pyrin and ZBP1, and cell death molecules were part of this AIM2-PANoptosome. The PANoptosome drove inflammatory cell death.

“This was critical evidence that the inflammasome sensors and molecules from multiple cell death pathways are in the same complex and highlighted the PANoptosome’s role in protecting the host during live pathogenic infections,” Lee said.

Live pathogens broadcast their presence more widely to the immune system, which helps to explain why the infections trigger PANoptosome assembly and a more robust immune response. Pathogens can also carry proteins that prevent activation of specific cell death pathways. PANoptosis provides an immune system workaround to protect the host.

“Our working hypothesis is that while the sensors involved may vary, most infections will induce formation of these unique innate immune complexes called PANoptosomes to unleash inflammatory cell death, PANoptosis,” Kanneganti said.

Funding and authors The other authors are Rajendra Karki, Yaqiu Wang, Lam Nhat Nguyen and Ravi Kalathur, all of St. Jude.

St. Jude Children's Research Hospital is leading the way the world understands, treats and cures childhood cancer and other life-threatening diseases. It is the only National Cancer Institute-designated Comprehensive Cancer Center devoted solely to children. Treatments developed at St. Jude have helped push the overall childhood cancer survival rate from 20% to 80% since the hospital opened more than 50 years ago. St. Jude freely shares the breakthroughs it makes, and every child saved at St. Jude means doctors and scientists worldwide can use that knowledge to save thousands more children. Families never receive a bill from St. Jude for treatment, travel, housing and food — because all a family should worry about is helping their child live. To learn more, visit stjude.org or follow St. Jude on social media at @stjuderesearch.

The PANoptosome: a new frontier in innate immune responses 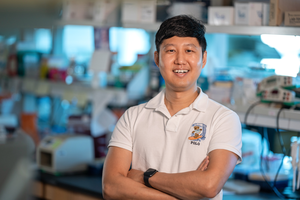