A new study, co-authored by University of Arizona researchers and published in the Sept. 1 issue of Nature, provides the first quantitative assessment of how environmental policies on deforestation, along with forest fires and drought, have impacted the diversity of plants and animals in the Amazon.

Researchers used records of more than 14,500 plant and vertebrate species to create biodiversity maps of the Amazon region. Overlaying the maps with historical and current observations of forest fires and deforestation over the last two decades allowed the team to quantify the cumulative impacts on the region's species.

They found that since 2001, between 40,000 and 73,400 square miles of Amazon rainforest have been impacted by fires, affecting 95% of all Amazonian species and as many as 85% of species that are listed as threatened in this region. While forest management policies enacted in Brazil during the mid-2000s slowed the rate of habitat destruction, relaxed enforcement of these policies coinciding with a change in government in 2019 has seemingly begun to reverse this trend, the authors write. With fires impacting 1,640 to 4,000 square miles of forest, 2019 stands out as one of the most extreme years for biodiversity impacts since 2009, when regulations limiting deforestation were enforced.

"We show how policy has had a direct and enormous influence on the pace at which biodiversity across the entire Amazon has been affected," said senior study author Brian Enquist, a professor in UArizona's Department of Ecology and Evolutionary Biology. He added that the findings are especially critical in light of the fact that at no point in time did the Amazon get a break from those increasing impacts, which would have allowed for some recovery.

"Even with policies in place, which you can think of as a brake slowing the rate of deforestation, it's like a car that keeps moving forward, just at a slower speed," Enquist said. "But in 2019, it's like the foot was let off the brake, causing it to accelerate again."

"Assessments based on remote sensing of burned and deforested areas had been done before, but we haven't had a detailed record of what impact those have on the species diversity of the region," said Xiao Feng, the study's first author who conducted most of the work while he was a postdoctoral researcher at UArizona and is now an assistant professor at Florida State University. "This has been a huge collection of data and an unprecedented informatics effort associated with biodiversity data, and that allowed us to make these interconnections visible."

Known mostly for its dense rainforests, the Amazon basin supports around 40% of the world's remaining tropical forests. It is of global importance as a provider of ecosystem services such as scrubbing and storing carbon from the atmosphere, and it plays a vital role in regulating Earth's climate. The area also is an enormous reservoir of the planet's biodiversity, providing habitats for one out of every 10 of the planet's known species. It has been estimated that in the Amazon, 1,000 tree species can populate an area smaller than a half square mile.

"This is important in light of the fact that biodiversity goes hand in hand with ecosystem functioning," Enquist said, adding that species with the smallest ranges tend to suffer the most. "Species can become virtually extinct even before they lose their entire range of habitat."

"Fire is not a part of the natural cycle in the rainforest," said study co-author Crystal N. H. McMichael at the University of Amsterdam. "Native species lack the adaptations that would allow them to cope with it, unlike the forest communities in temperate areas. Repeated burning can cause massive changes in species composition and likely devastating consequences for the entire ecosystem."

Since the 1960s, the Amazon has lost about 20% of its forest cover to deforestation and fires. While fires and deforestation often go hand in hand, that has not always been the case, Enquist said. As climate change brings more frequent and more severe drought conditions to the region, and fire is often used to clear large areas of rainforest for the agricultural industry, deforestation has spillover effects by increasing the chances of wildfires. Forest loss is predicted reach 21 to 40% by 2050, and such habitat loss will have large impacts on the region's biodiversity, according to the authors.

"What's nasty about fire in that region is once it starts to encroach on areas that have not been burned, it degrades them irreparably and makes them more susceptible to burning in the future," he said.

"Since the majority of fires in the Amazon are intentionally set by people, preventing them is largely within our control," said study co-author Patrick Roehrdanz, senior manager of climate change and biodiversity at Conservation International. "One way is to recommit to strong antideforestation policies in Brazil, combined with incentives for a forest economy, and replicate them in other Amazonian countries."

Policies to protect Amazonian biodiversity should include the formal recognition of Indigenous lands, which encompass more than one-third of the Amazon region, the authors write, pointing to previous research showing that lands owned, used or occupied by Indigenous peoples have less species decline, less pollution and better-managed natural resources.

The authors say their study underscores the dangers of continuing lax policy enforcement. As fires encroach on the heart of the Amazon basin, where biodiversity is greatest, their impacts will have more dire effects, even if the rate of forest burning remains unchanged.

"We have to remember that it took decades to reduce Amazon deforestation, but it may take just a few years to destroy the conservation policy pillars of conservation," said co-author Paulo Brando, assistant professor in the Department of Earth System Science at the University of California Irvine. "The recent reverse in deforestation and fires trends, and their impacts on Amazon biodiversity, should be a huge cause of concern."

The research was made possible by strategic investment funds allocated by the Arizona Institutes for Resilience at UArizona and the university's Bridging Biodiversity and Conservation Science group. Additional support came from the National Science Foundation's Harnessing the Data Revolution program. Data and computation were provided through the Botanical Information and Ecology Network, which is supported by CyVerse, the NSF's data management platform led by UArizona. 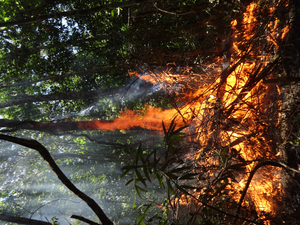 Burning tree in the Amazonian rainforest

Downed trees left smoldering after succumbing to a forest fire