A gecko's tail is a wondrous and versatile thing.

In more than 15 years of research on geckos, scientists at the University of California, Berkeley, and, more recently, the Max Planck Institute for Intelligent Systems in Stuttgart, Germany, have shown that geckos use their tails to maneuver in midair when gliding between trees, to right themselves when falling, to keep from falling off a tree when they lose their grip and even to propel themselves across the surface of a pond, as if walking on water.

Many of these techniques have been implemented in agile, gecko-like robots.

But Robert Full, UC Berkeley professor of integrative biology, and Ardian Jusufi, faculty member at the Max Planck Research School for Intelligent Systems and former UC Berkeley doctoral student, were blown away by a recent discovery: Geckos also use their tails to help recover when they take a header into a tree.

Those head-first crashes are probably not the geckos' preferred landing, but Jusufi documented many such hard landings in 37 glides over several field seasons in a Singapore rainforest, using high-speed video cameras to record their trajectories and wince-inducing landings. He clocked their speed upon impact at about 6 meters per second, or 21 kilometers per hour — more than 200 feet per second, or about 120 gecko body lengths per second.

"Observing the geckos from elevation in the rainforest canopy was eye-opening. Before take-off, they would move their head up-and-down, and side-to-side to view the landing target prior to jumping off, as if to estimate the travel distance," Jusufi said.

The videos show that when this gecko — the common Asian flat-tailed house gecko, Hemidactylus platyurus — collides head-on with a tree, it grabs the trunk with its clawed and padded toes so that, as its head and shoulders rebound, it has leverage to press its tail against the trunk to prevent itself from tumbling backward onto the ground and potentially ending up as someone’s dinner.

“Far from stalling, some of these lizards are still accelerating upon impact,” Jusufi said. “They crash headfirst, pitch back head over heels at an extreme angle from the vertical — they look like a bookstand sticking away from the tree — anchored only by their rear legs and tail as they dissipate the impact energy. With the fall-arresting reflex happening so fast, only slow motion video could reveal the underlying mechanism.”

This surprising behavior, and a demonstration that robots with tails that act similarly also can successfully recover from crash landings, will be reported this week in the Nature journal Communications Biology. Though this type of headfirst crash landing has not been documented previously among geckos or other gliding animals, the scientists suspect that other small, lightweight leapers — in particular, other lizards — use this as a backup when a perfect jump is impossible.

“They may have longer glides that are more equilibrium glides, and they land differently, but, for example, if they are trying to escape, they choose to do this kind of behavior, in part because size matters,” Full said, noting that the lizards measure only a couple of inches from snout to tail tip. “When you're that small, you have options that aren't solutions for big things. So, this is sort of a body-mediated solution that you don't have if you're bigger.”

Jusufi and Full note that structures similar to gecko tails could be used to help stabilize flying robots, such as drones, when they land on vertical surfaces.

According to the researchers, this unusual behavior, which they're the first to document, mathematically model and reproduce in a soft robot, is an example of how an evolutionary innovation like a tail can be used in unforeseen ways. Vertebrate tails evolved in aquatic animals, likely as a means of propulsion in the water — something Jusufi also studies and models with soft robots that undulate. But the tail turned out to be such a versatile thing that the lizard evolved various exaptations, a term for structures that were shaped by natural selection for a particular function or adaptation, but that have been used for other behaviors.

“Exaptations are structures that have been co-opted for many behaviors, no matter what that structure evolved for originally, and here's one that you wouldn't expect,” Full said. “You can see how that incredible capability of being robust can allow these exaptations.”

“Until recently tails had not received as much attention as legs or wings, but people are now realizing that we should think of these animals as five-legged, in a way — pentapedal,” Jusufi said.

Full said that as robotic engineers attempt to add more and more functions to robots, they are finding that they can’t introduce a new part for every capability. A tail is one structure that, as lizards found out, can have multiple purposes.

“As we evolve our robots and physical systems, engineers all want to do more things. And guess what? At some point, you can't optimize a robot for everything,” he said. “You have to use things for other behaviors in order to get those behaviors.”

In Singapore, Jusufi and his colleagues used high-speed cameras to record geckos leaping to trees that were too close to allow gliding. Even though the flat-tailed gecko is not particularly adapted to gliding — some geckos have skin flaps that are like parachutes – it has some ability to glide and thus maneuver in midair. But gliding requires reaching terminal velocity so that the lizard can maneuver in midair, and the leaps weren't long enough for that.

Unable to glide or slow themselves by stalling before landing, the geckos crashed hard, usually headfirst. When they analyzed the trajectories and mechanics of the falling geckos, the researchers found that some were still accelerating on impact. Most could not maintain a grasp on the tree with their front feet.

“Our field observations of these small, agile lizards in the rainforest revealed highly dynamic, fall-arresting responses nobody thought these geckos could execute with their tails,” Jusufi said. "Our field observations suggest they exapted tail behavior thought to be for climbing to perching after gliding flight."

The researchers modeled the behavior mathematically to confirm that what they were seeing made sense physically, but to really determine what the geckos were experiencing, they decided to build a soft robot at the Max Planck Institute that resembles a gecko and launch it with a catapult into the wall. This way, they could measure the forces actually sustained by the geckos when they crash-land, and the forces produced by the feet.

They built the tailed robot from parts made by a state-of-the art 3D printer, Carbon M2, that is specifically designed to print soft structures. The feet were outfitted with Velcro to stick upon contact, and to the tail they added a mechanism that would make it press downward when the front legs hit a surface and slip, like the gecko’s tail reflex.

Surprisingly, the tailed robot had similar success when making hard landings. In the wild, 87% of geckos with tails successfully landed on a vertical surface without falling, while tailless geckos fell more frequently. (Geckos often shed their tails to escape from predators or their rivals, and regrow them later.) Tailless robots were only able to land successfully on a vertical surface in 15% of the trials, compared to 55% of trials involving the tailed robot.

The researchers also found that, beyond a certain length, longer tails aren’t necessarily that much better than shorter tails: Robots with tails only half the length of the head and body combined were nearly as successful as those with tails equal to the snout-vent length. Short-tailed robots, however, required twice the foot force to stay attached to the tree.

Full and Jusufi continue to study the behavior of geckos in search of principles that can be applied to the design of robots — in particular, soft robots that can perch in trees and land on vertical surfaces — but also to explore the evolutionary origins of animal locomotion. One key takeaway, Full said, is that, while engineers may seek to design the optimal robot, nature never does.

“Evolution is not about optimality and perfection, but instead, it’s about sufficiency. The just-good-enough solution really plays into giving you a breadth of capabilities so that you're far more robust in challenging environments,” Full said. “Evolution looks like more like a tinkerer who never really knows what they'll produce and uses everything that's at their disposal to make something that's workable.”

Co-authors are Rob Siddall, a postdoctoral fellow in the Locomotion in Biorobotic and Somatic Systems Group at the Max Planck Institute, and former UC Berkeley doctoral student Greg Byrnes, now an associate professor of biology at Siena College in Loudenville, New York. The work was supported by grants from the Max Planck Institute, the Cyber Valley Research Fund, the Swiss National Science Foundation and the U.S. Army.

These geckos crash-land on rainforest trees but don't fall, thanks to their tails 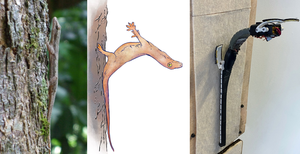 Comparison of gecko and robot landings