An international collaboration has discovered and transferred to elite wheat varieties a wild-grass chromosome segment that causes roots to secrete natural inhibitors of nitrification, offering a way to dial back on heavy fertilizer use for wheat and to reduce the crop’s nitrogen leakage into waterways and air, while maintaining or raising its productivity and grain quality, says a new report in the Proceedings of the National Academy of Sciences of the United States of America.

Growing wheat varieties endowed with the biological nitrification inhibition (BNI) trait could increase yields in both well-fertilized and nitrogen-poor soils, according to G.V. Subbarao, researcher at the Japan International Research Center for Agricultural Sciences (JIRCAS) and first author of the new report.

“Use of wheat varieties that feature BNI opens the possibility for a more balanced and productive mix of nitrogen nutrients for wheat fields, which are currently dominated by highly-reactive nitrogen compounds that derive in large part from synthetic fertilizers and can harm the environment,” Subbarao said.

The most widely grown food crop on the planet, wheat is consumed by over 2.5 billion people in 89 countries. Nearly a fifth of the world’s nitrogen-based fertilizer is deployed each year to grow wheat but, similar to other major cereals, vegetables, and fruits, the crop takes up less than half of the nitrogen applied.

Much of the remainder is either washed away, contaminating ground waters with nitrate and contributing to algae blooms in lakes and seas, or released into the air, often as nitrous oxide, a greenhouse gas 300 times more potent than carbon dioxide.

The study team first homed in on the chromosome region associated with the strong BNI capacity in the perennial grass species Leymus racemosus and moved it from the grass, using “wide crossing” techniques, into the cultivar Chinese Spring, a wheat landrace often used in genetic studies. From there, they transferred the BNI chromosome sequence into several elite, high-yielding wheat varieties, leading to a near doubling of their BNI capacity, as measured through lab analyses of soil near their roots.

The new wheats — elite varieties from the International Maize and Wheat Improvement Center (CIMMYT) into which the BNI trait was cross-bred — greatly reduced the action of soil microbes that usually convert fertilizer and organic nitrogen substances into ecologically-harmful compounds such as nitrous oxide gas, according to Hannes Karwat, a CIMMYT post-doctoral fellow and study co-author.

“The altered soil nitrogen cycle was even reflected in the plants’ metabolism,” Karwat said, “resulting in several responses indicative of a more balanced nitrogen uptake in the plants.”

“This points the way for farmers to feed future wheat consumers using lower fertilizer dosages and lowering nitrous oxide emissions,” said Masahiro Kishii, a CIMMYT wheat cytogeneticist who contributed to the research. “If we can find new BNI sources, we can develop a second generation of elite wheat varieties that require even less fertilizer and that better deter nitrous oxide emissions.”

A recent PNAS paper by Subbarao and Princeton University scientist Timothy D. Searchinger mentions BNI as a technology that can help foster soils featuring a more even mix of nitrogen sources, including more of the less-chemically-reactive compound ammonium, a condition that can raise crop yields and reduce nitrous oxide emissions.

Scale out to slow global warming?

The present study comes just as the Intergovernmental Panel on Climate Change (IPCC) has released its Sixth Assessment Report, which among other things states that “… limiting human-induced global warming … requires limiting cumulative CO2 emissions … along with strong reductions in other greenhouse gas emissions.”

Globally, 30% of greenhouse gas emissions come from agriculture. BNI-enabled wheat cultivars can play an important role to reduce that footprint. Wheat-growing nations that have committed to the Paris Climate Accord, whose provisions include reducing greenhouse gas emissions 30% by 2050, could be early adopters of the BNI technology, together with China and India, the world’s top two wheat producers, according to Subbarao.

“This work has demonstrated the feasibility of introducing BNI-controlling chromosome segments into modern wheats, without disrupting their yields or quality,” said Subbarao. “To realize the technology’s full potential, we need to transfer the BNI feature into many elite varieties adapted to diverse wheat growing areas and to assess their yield in many farm settings and with varying levels of soil pH, fertilization and water use.”

A project to establish nitrogen-efficient wheat production systems in the Indo-Gangetic Plains using BNI has recently been approved by Japan and is under way, with the collaboration of JIRCAS, the Indian Council of Agricultural Research (ICAR), and the Borlaug Institute of South Asia (BISA). Under the project, BNI-converted wheat lines developed from JIRCAS-CIMMYT partnerships will be tested in India and the BNI trait transferred to popular national wheat varieties.

“The BNI-technology is also featured in Green Technology, a Japanese government policy document for moving towards a zero-carbon economy,” said Osamu Koyama, President of JIRCAS, which has also posted a note about the new PNAS study.

“Adaptation and mitigation solutions such as BNI, which help lessen the footprint of food production systems, will play a large role in CGIAR research-for-development, as part of One CGIAR Initiatives starting in 2022,” said Bram Govaerts, CIMMYT Director General. 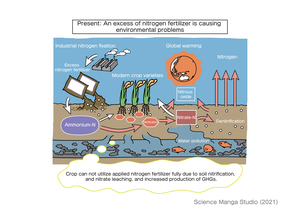 Present issues caused by excess use of nitrogen fertilizer 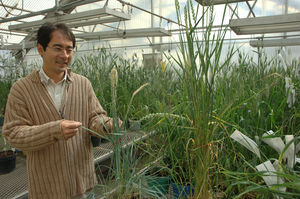