The first comprehensive list of the threats to Australia’s most endangered plants and animals reveals blunt news about the future for some of the country’s favourite species.

The University of Queensland-led study has compiled a data set, listing the threats to Australian species from habitat loss, fragmentation, and degradation.

Michelle Ward, a PhD candidate at UQ’s School of Earth and Environmental Sciences said while it painted a grim picture for many plants and animals, it was not all bad news.

“This information can improve the conservation of some of Australia’s most endangered plants and animals by providing conservation managers with more precise data to better direct their efforts,” Ms Ward said.

“The database has been distributed to federal and state governments and conservation groups like Birdlife Australia, World Wide Fund for Nature, and the Nature Conservancy, who are using it to help inform their conservation actions.

“It brings together knowledge from experts across Australia and it has a range of applications – not only to prioritise conservation work, but also to assess when developments might have significant impacts on species.”

The list includes an in-depth analysis of almost 1800 plants and animals listed as threatened under Australian Commonwealth law – including 1339 plants and 456 animals.

“More accurate conservation efforts are now possible due to the ability to categorise and address these threats facing our at-risk species,” Ms Ward said.

“Looking at the data, conservation managers can see that mitigating habitat loss, invasive species, and disease, while also improving fire regimes and curtailing the impact of climate change wherever possible is crucial for curbing species decline.”

“Before now we didn’t have comprehensive information on the threats to these species, and more importantly, the severity of those threats,” Dr Reside said.

“For example, the swift parrot is facing 17 different threats including habitat loss from logging and agriculture, invasive weeds, and the many and varying effects of climate change.

“So now we know the range of threats that need to be addressed to save this iconic bird.

“With this information, we are now better equipped to protect the plants and animals that we cherish so much in Australia.”

The study was carried out with the support of eight universities and seven conservation, environmental and ecological science organisations throughout Australia. 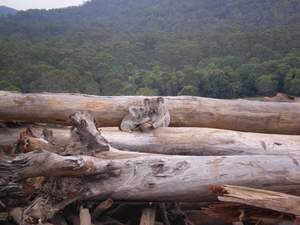 Mother and joey koala after deforestation of habitat.