NORMAN, OKLA. – A research team led by Michael Biggerstaff, a professor of meteorology in the College of Atmospheric and Geographic Sciences at the University of Oklahoma, successfully captured data with mobile radars and other weather instruments as Hurricane Ida made landfall in Louisiana.

“The goal of this research, funded by the National Institute for Standards and Technology, is to capture the vertical profile, duration and gustiness of extreme winds in an effort to provide information that could improve building codes and mitigate damage to homes and commercial buildings,” Biggerstaff said.

The team captured unique datasets during the landfall of Hurricane Ida and as it transitioned into a tropical storm.

“Eventually, the outer eyewall dissipated, giving the inner eyewall an opportunity to increase in strength again as the eye was filling in to the west of New Orleans,” he specified. “This is the first time the process of an eyewall replacement cycle at landfall has been observed at such high temporal and spatial scales and should help improve forecasts of this process, which is responsible for significant changes in storm intensity over time scales of a few hours.”

Additionally, the SMART radars observed many mesovortices, small-scale rotational features found in convective storms, along the inner edge of the eyewall before, during and after landfall. This is the 13th landfalling hurricane Biggerstaff has studied with the SMART radars, including three deployments in Louisiana last year.

“Research from our deployment into Hurricane Harvey in 2017 shows these mesovortices can produce extreme wind gusts that add to the damage associated with the hurricane,” he said. “Moreover, these mesovortices help redistribute energy across the eyewall that affects both the strength and breadth of damaging winds.”

“Together with the additional effort of scientists from other universities, Hurricane Ida may be one of the best observed landfalling hurricanes to date,” he added.

Hurricane Ida ‘May Be One of the Best Observed Landfalling Hurricanes’

Hurricane Ida ‘may be one of the best observed landfalling hurricanes’ 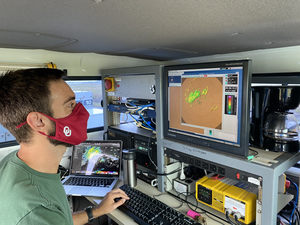