Bird dispersal movements are thought to depend on complex demographic and genetic factors. Dr. Santiago Claramunt, Associate Curator of Birds at the Royal Ontario Museum (ROM) and Assistant Professor in the Department of Ecology and Evolutionary Biology of the University of Toronto, shows that there may be a simpler explanation: bird dispersal distances depend on the morphology and flight efficiency of the wings. The study, “Flight efficiency explains differences in natal dispersal distances in birds”, was published in the journal Ecology.

When a bird moves to establish a new breeding territory, how far does it go? This is a simple but fundamental question in ecology and evolution. Despite great advances in tracking technologies, we know little about the movement of young birds. Natal dispersal, the movement of birds from the place where they were born to a new breeding site, has important consequences for bird demography, genetic connectivity, and conservation.

The ability to predict bird dispersal capabilities from wing morphology may have applications in biodiversity conservation, the study concludes. “Climate change and habitat fragmentation are having a huge impact on bird populations and the capacity of species to move across the landscape can determine which species will thrive and which may become endangered. Species with reduced flight capabilities will have a harder time dealing with these impacts.” says Claramunt. Previous studies have shown that flightless birds are more prone to extinction, but birds with poor flight capabilities may be similarly threatened. “By using our museum specimens to estimate flight capabilities we can identify species that would be particularly vulnerable to these conservation challenges.”

The study evaluated the relationship between flight efficiency and natal dispersal distances for 75 bird species in the British Islands using data from the bird-ringing program of the British Trust for Ornithology. Bird wings size and shape were measured from collections held at the Royal Ontario Museum, the Louisiana State University Museum of Natural Science, and the University of Washington Burke Museum.

Species with elongated wings and efficient flights such as the Barn Swallow, Hirundo rustica, disperse long distances while species with short rounded wings such as the House Sparrow, Passer domesticus, remain very close to their nesting site.

Bird aerodynamics studies have long indicated that elongated (high aspect ratio) wings are the most efficient for long distance flights. This new study confirms this prediction in the context of dispersal distances.

I declare no conflict of interest. 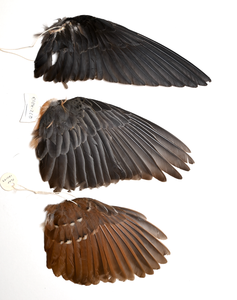