Astronomers can’t touch the stars they study, but astrophysicist Nia Imara is using 3-dimensional models that fit in the palm of her hand to unravel the structural complexities of stellar nurseries, the vast clouds of gas and dust where star formation occurs.

Imara and her collaborators created the models using data from simulations of star-forming clouds and a sophisticated 3D printing process in which the fine-scale densities and gradients of the turbulent clouds are embedded in a transparent resin. The resulting models—the first 3D-printed stellar nurseries—are highly polished spheres about the size of a baseball (8 centimeters in diameter), in which the star-forming material appears as swirling clumps and filaments.

“We wanted an interactive object to help us visualize those structures where stars form so we can better understand the physical processes,” said Imara, an assistant professor of astronomy and astrophysics at UC Santa Cruz and first author of a paper describing this novel approach published August 25 in Astrophysical Journal Letters.

An artist as well as an astrophysicist, Imara said the idea is an example of science imitating art. “Years ago, I sketched a portrait of myself touching a star. Later, the idea just clicked. Star formation within molecular clouds is my area of expertise, so why not try to build one?” she said.

She worked with coauthor John Forbes at the Flatiron Institute’s Center for Computational Astrophysics to develop a suite of nine simulations representing different physical conditions within molecular clouds. The collaboration also included coauthor James Weaver at Harvard University’s School of Engineering and Applied Sciences, who helped to turn the data from the astronomical simulations into physical objects using high-resolution and photo-realistic multi-material 3D printing.

The results are both visually striking and scientifically illuminating. “Just aesthetically they are really amazing to look at, and then you begin to notice the complex structures that are incredibly difficult to see with the usual techniques for visualizing these simulations,” Forbes said.

For example, sheet-like or pancake-shaped structures are hard to distinguish in two-dimensional slices or projections, because a section through a sheet looks like a filament.

“Within the spheres, you can clearly see a two-dimensional sheet, and inside it are little filaments, and that’s mind boggling from the perspective of someone who is trying to understand what’s going on in these simulations,” Forbes said.

The models also reveal structures that are more continuous than they would appear in 2D projections, Imara said. “If you have something winding around through space, you might not realize that two regions are connected by the same structure, so having an interactive object you can rotate in your hand allows us to detect these continuities more easily,” she said.

The nine simulations on which the models are based were designed to investigate the effects of three fundamental physical processes that govern the evolution of molecular clouds: turbulence, gravity, and magnetic fields. By changing different variables, such as the strength of the magnetic fields or how fast the gas is moving, the simulations show how different physical environments affect the morphology of substructures related to star formation.

Stars tend to form in clumps and cores located at the intersection of filaments, where the density of gas and dust becomes high enough for gravity to take over. “We think that the spins of these newborn stars will depend on the structures in which they form—stars in the same filament will ‘know’ about each other’s spins,” Imara said.

With the physical models, it doesn’t take an astrophysicist with expertise in these processes to see the differences between the simulations. “When I looked at 2D projections of the simulation data, it was often challenging to see their subtle differences, whereas with the 3D-printed models, it was obvious,” said Weaver, who has a background in biology and materials science and routinely uses 3D printing to investigate the structural details of a wide range of biological and synthetic materials.

“I’m very interested in exploring the interface between science, art, and education, and I’m passionate about using 3D printing as a tool for the presentation of complex structures and processes in an easily understandable fashion,” Weaver said. “Traditional extrusion-based 3D printing can only produce solid objects with a continuous outer surface, and that’s problematic when trying to depict, gases, clouds, or other diffuse forms. Our approach uses an inkjet-like 3D printing process to deposit tiny individual droplets of opaque resin at precise locations within a surrounding volume of transparent resin to define the cloud's form in exquisite detail.”

He noted that in the future the models could also incorporate additional information through the use of different colors to increase their scientific value. The researchers are also interested in exploring the use of 3D printing to represent observational data from nearby molecular clouds, such as those in the constellation Orion.

The models can also serve as valuable tools for education and public outreach, said Imara, who plans to use them in an astrophysics course she will be teaching this fall. 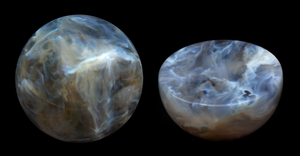 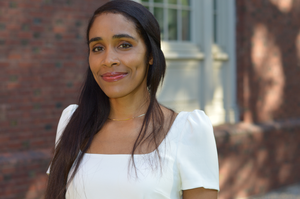 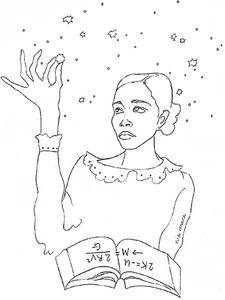