Meeting society’s growing energy needs has become a daunting challenge for humanity. Demands for energy are expected to nearly double by the year 2050, while the effects of climate change, caused by the burning of fossil fuels, are already wreaking havoc in the form of droughts, wildfires, floods and other disasters.

Gary Moore, a researcher at the Biodesign Center for Applied Structural Discovery, thinks chemistry will play a vital role in the development of clean solutions to the world’s mounting energy dilemma.

In new research appearing on the cover of the journal ChemElectroChem, Moore and his colleagues describe the use of ring-shaped molecules known as porphyrins. Such molecules, among the most abundant pigments in nature, are noted for their ability to speed up or catalyze chemical reactions, including important reactions occurring in living systems.

Among these reactions is the conversion of radiant energy from the sun into chemical energy stored in molecular bonds, a process exploited by plants and photosynthetic microbes. This chemical energy can then be used to fuel the organism’s metabolism, through the process of cellular respiration.

Researchers like Moore hope to take a page from nature’s playbook, creating synthetic analogues to natural processes of photosynthesis. The new study describes a synthetic diiron-containing porphyrin and explores its potential as an effective catalyst.

“Rather than exploiting the products of natural photosynthesis, we can be inspired by our knowledge of photosynthesis to pioneer new materials and technologies with properties and capabilities rivalling those of their biological counterparts,” says Moore.

Porphyrins, and their structurally related analogs, are found in abundance across the biological world. They act to bind a range of metal ions to perform far-flung cellular tasks. Chlorophyll molecules, for example, bind magnesium—a crucial chemical stage in plant photosynthesis, while heme—an iron containing porphyrin—help organize molecular oxygen and carbon-dioxide transport and provide the necessary electron-transport chains essential for cellular respiration. Because of their commanding role in life processes, porphyrin abnormalities are responsible for a range of serious diseases.

Porphyrins can also be used as catalysts in synthetic devices known as electrochemical cells, which convert chemical energy into electrical energy, or vice versa. Although radiant energy from the sun may be stored within conventional types of batteries, such applications are limited by their low-energy densities compared with fuels used for modern transportation.

Moore’s efforts to design artificial photosynthetic systems could provide a valuable piece of the renewable energy puzzle, producing “non-fossil-based” fuels as well as a range of beneficial commodities.

Such devices would allow the capture and storage of solar energy for use when and where it is needed and can be constructed using chemicals that are far cheaper and more abundant than the materials currently in use for conventional solar energy applications.

The paper has been selected for the cover of the current issue of the journal, with a descriptive graphic produced by Jason Drees, Multimedia Developer Lead at ASU 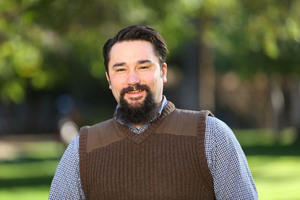