Researchers at the National Institute of Standards and Technology (NIST) have conducted the first demonstration of a faster and more accurate way to calibrate certain kinds of microphones.

The technique, which uses lasers to measure the velocity at which a microphone’s diaphragm vibrates, performs well enough to overtake one of the main calibration methods used at NIST and throughout industry. Someday, a laser-based method could be commercialized to become a completely new way to do extremely sensitive, low-uncertainty calibrations of microphones in the field, in places such as factories and power plants. Potential users of such a commercial system could include organizations that monitor workplace or community noise levels or the condition of machinery via sound.

“There’s nothing like this on the market now, not that I’m aware of,” said NIST scientist Randall Wagner. “It would be far in the future — a pie-in-the-sky kind of thing — but I see this work as opening the door to commercial applications.”

Their work was published online this week in JASA Express Letters.

Traditional “comparison calibrations” involve comparing a customer’s microphone to a laboratory standard microphone that has already been calibrated by other means. The new laser method demonstrated by NIST has lower uncertainties and is roughly 30% faster than the traditional comparison method currently used at NIST to calibrate customers’ microphones.

“People have been looking for a highly accurate calibration method that uses lasers, and they haven’t found an approach that is competitive with the most accurate existing method,” said NIST scientist Richard Allen. “But now we’ve found a comparison calibration that is better than the ones used in common practice.”

Sound is pressure waves traveling through a medium such as air. A microphone is a device that takes those pressure waves and turns them into an electrical signal.

To calibrate a microphone, researchers need to measure how sensitive it is to pressure waves. They start by calibrating a set of laboratory standard microphones using a technique called the “reciprocity method” — the gold standard for microphone calibrations.

In a reciprocity calibration, two microphones are connected to each other via a small hollow cylinder called an acoustic coupler. One microphone produces a sound that the other microphone picks up. After a measurement has been taken, the microphones’ functional positions can be swapped, with the transmitter acting as receiver and vice versa.

(And yes, the microphones are sometimes used to produce sounds rather than just receive them. Unlike the microphones you might use for a conference call or karaoke night, laboratory standard microphones are able to perform as either a receiver or as a transmitter — essentially a loudspeaker.)

This process is repeated several times using a total of three laboratory standard microphones. By exchanging the microphones’ roles between measurements, researchers can be sure of the sensitivity of each of the three microphones without the need for a previously calibrated microphone.

Traditional microphone calibration methods are acoustical — they rely on transmission of sound through a medium. In contrast, the new laser-based calibration method measures the physical vibrations of the diaphragm itself.

For their recent experiment, NIST researchers used a laser Doppler vibrometer, a commercial instrument that shines a laser beam onto the surface of a microphone whose diaphragm is vibrating at a set frequency. (See animation.)

The beam bounces off the surface of the diaphragm and is recombined with a reference laser beam. In this way, subtle shifts in frequency are measured. (These shifts in frequency work along the same principle as the Doppler effect, which causes that ambulance outside your window to sound higher-pitched as it approaches and lower-pitched as it moves away.) Researchers convert the signal from the vibrometer into a velocity, which tells them how fast the diaphragm was vibrating at that point on its surface.

To conduct the new test, NIST scientists used nine nominally identical laboratory standard microphones, each with an 18.6 millimeter diameter diaphragm, about the width of a postage stamp. All were tested at two frequencies, 250 hertz (for piano players, roughly the B note below middle C) and 1,000 hertz (two octaves higher than 250 hertz).

They began by measuring over the whole surface area of the diaphragms. They found that the velocity in the center of the diaphragms was significantly higher than near the edges, where there was practically no motion.

Ultimately, they discovered that the best approach was to use data from just a small section at the center of the diaphragms taking up only 3% of the total surface area. The idea of using just the central section came from a recent paper by a team of researchers from the Republic of Korea and Japan.

“The key to making the velocity measurements nice and repeatable is measuring in the center of the diaphragm,” Wagner said. “As you go further and further toward the edges, our measurements just weren’t very repeatable.”

As a final step, Wagner and Allen compared the microphone sensitivities they measured with the laser-based calibrations to measurements they had previously taken using the gold-standard reciprocity calibrations with the same set of microphones. The verdict?

“The numbers agreed very well,” Wagner said. “They were statistically indistinguishable from each other.”

Wagner and Allen say that the laser comparison method saves “significant time” primarily because it is performed in open air. In contrast, the traditional NIST way of doing a comparison at higher frequencies requires connecting two microphones with an acoustic coupler and then filling the coupler with hydrogen, which takes up to 20 minutes per test.

Wagner hopes that scientists will find a way to develop the laser-based system into a highly accurate primary calibration method that rivals or even outperforms the gold-standard reciprocity method. If successful, a primary laser-based method would be significantly faster, since the reciprocity method requires researchers to repeat the measurements multiple times with different combinations of microphones and acoustic couplers.

Meanwhile, Wagner thinks the laser method could someday be standardized by a standards organization.

“That would be a consensus stamp of acceptance,” Wagner said. Until then, he continued, “we have a lot of work left to do.”

In the coming months, he and Allen will be upgrading to a more sensitive laser Doppler vibrometer system and will begin expanding the types of microphones calibrated as well as the range of frequencies. They have applied for a provisional patent, and they will also try to turn the method into a suitable primary calibration technique.

“This first attempt was sort of an example of walking past the trees and seeing the really low-hanging fruit, and grabbing it,” Allen said.

“I’ve been at NIST 30 years, and I don’t recall a project that brought vibration and acoustics so closely together,” Wagner said. 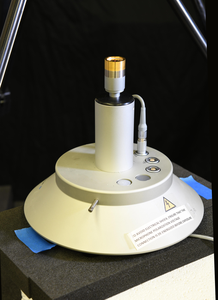