Scientists at the University of Miami Rosenstiel School of Marine and Atmospheric Science (UM) and the Institute of Zoology at the Zoological Society London (ZSL) found that tiger sharks, often considered a solitary nomadic species, are social creatures, having preferences for one another.

A first of its kind, the study also evaluated if exposure of the tiger shark to baited dive tourism impacted their social behavior. The study was conducted at a site named Tiger Beach, located off the north-west side of Little Bahama bank in the Bahamas. The area is known for hosting shark diving encounters, where the sharks are attracted with chum and often fed in front of dive tourists.

The research team tagged and tracked the movements of tiger sharks over the course of three years. They then applied a tool called Social Network Analysis to the tracking data to examine if tiger sharks exhibited social grouping behavior and if this social behavior differed at locations where sharks were exposed to baited shark dive tourism. The study not only found that tiger sharks formed social groups, but also discovered that at sites where tiger sharks were being fed by dive tourism operators, tiger sharks became more aggregated, but interactions between sharks became more random, suggesting a breakdown in social organization.

“Given that tiger sharks spend months at a time out in the open ocean as solitary predators, it’s amazing to me that they show social preferences for one another when they are at the Tiger Beach area,” said Neil Hammerschlag, senior author of the study and research associate professor at the UM Rosenstiel School. “For nearly two decades, I have spent countless hours diving at Tiger Beach, always wondering if these apex predators interacted socially. Now we know.”

Baited shark dives are often conducted by dive tourism companies to attract the animals so that tourists may observe them. This approach has been known to cause mixed feelings among conservationists and shark experts, due to the possible long-term impacts on the predators, such as changes to their natural foraging behavior. This study found that tiger sharks aggregated at the dive sites, but social preferences between sharks were less prevalent as compared to areas outside of these dive sites. These results suggest that feeding sharks may disrupt their social organization, but only temporarily, as the study found that tiger sharks resumed their social groupings outside of the dive sites.

“The boundary between wildlife and people is becoming increasingly thin, so as well as observing a new social behavior for the first time in what was once thought of as a solitary shark, we also measured the impacts of human activity on these predators’ interactions.  They seem to show some resilience to the bait feeding,” said David Jacoby, ZSL Honorary Research Associate and lead author of the study.

The social behavior of predators is an important area of study as it provides another tool to help scientists and wildlife managers build a picture of how they live, what drives them to form social groups, and the roles they play within the wider ecosystem.

About the University of Miami’s Rosenstiel School

The University of Miami is one of the largest private research institutions in the southeastern United States. The University’s mission is to provide quality education, attract and retain outstanding students, support the faculty and their research, and build an endowment for University initiatives. Founded in the 1940’s, the Rosenstiel School of Marine & Atmospheric Science has grown into one of the world’s premier marine and atmospheric research institutions. Offering dynamic interdisciplinary academics, the Rosenstiel School is dedicated to helping communities to better understand the planet, participating in the establishment of environmental policies, and aiding in the improvement of society and quality of life. For more information, visit: www.rsmas.miami.edu and Twitter @UMiamiRSMAS

Study shows tiger sharks have social preferences for one another 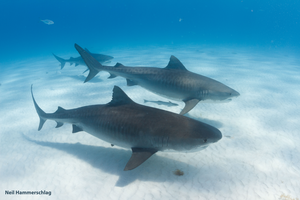