Led by Professor Xin Lu and Xiaohong Chen, an international team has used nationwide mobility data in China to examine the extreme fluctuations of population movements in 2020, ranging from the Lunar New Year travel season (chunyun), to the exceptional calm of COVID-19 lockdowns, and then to the recovery periods. They found that the cross-city movements increased substantially in chunyun and then followed by a sharp drop beginning on January 23, when lockdown measures were implemented. With travel restrictions immediately adopted in other provinces following the Wuhan lockdown, this reduction was sustained for almost three weeks in China: the population flow reached the minimum level (29.15 million) on February 15, dropping to nearly a quarter of the population flow on January 22 (124.87 million). “The magnitude of population flow had kept declining for over three weeks, it indicated the long-lasting effective lockdown measures taken by the government”, says Suoyi Tan, first author of this study.

Since chunyun is a temporary relocation that occurs over the Lunar New Year holiday, people might have travelled when chunyun began and then travelled back to their prior locations afterward. Throughout the process, the return trips roughly matched the outward trips. Over 55% of all pair of cities exhibited reversed netflow between chunyun and recovery times. This study investigates this phenomenon and refers to it as the backflow effect. The travel restrictions delayed more than 72.89 million people returning by the end of chunyun, mainly for work and education purposes. High-tier prefectures were the leading destinations of those delayed population flows, while the low-tier prefectures around the neighboring central prefectures retained a large fraction of population flows (The concept of prefecture tier is a hierarchical classification of Chinese prefectures that describes the prefecture’s relative level of development). For Beijing, Shanghai, Guangzhou, and Shenzhen, this number holds for 17.14 million. “Changes in human movements were partially driven by NPIs, such as lockdown measures, events cancellation, universities and business closures. Additionally, many citizens spontaneously obeyed social distancing measures, staying at home for as long as possible”, Xin Lu explains. As a result, China has, to date, been considered as one of the most successful national strategies for COVID-19 suppression.

Despite large variations in mobility at the national scale, the study found that clusters of prefectures formed by densely connected cities remained stable across the extreme periods of mass migration and travel restrictions. In all four periods, most high-tier prefectures retained in the same city cluster (usually centered around two or three neighboring central prefectures) than low-tier prefectures. Higher-tier prefectures have integrated overall strengths, which amplified their influence and radiation effect and promoted the regional socio-economic development, thus creating more opportunities for them to draw substantial population inbound from lower-tier prefectures. “The mobility pattern reflects the impact factors for the formation of urban agglomeration, such as geographic space, economic scale, political resources, and the industrial structure. These impacts will not disappear even when there is a public health emergency.” Xiaohong Chen says.

A systematic understanding of the mobility patterns of populations and subsequent outcomes are of critical importance for decision making regarding future public health emergency response, transportation planning, and regional economic development, among others. The study provides a state-of-the-art understanding of China’s migration patterns during both stable and unstable scenarios. It indicates that the best public health strategy for minimizing serious outcomes in viral outbreaks is to control the viral spread at the earliest stage. Additionally, as aggregated mobility data can provide near real-time information regarding changes in human mobility patterns, it can also be used to evaluate the effectiveness of government public health policies, such as travel restrictions and the integration of NPIs and vaccination, thereby contributing to the fight against future waves of this pandemic and the threat of new variants. With accurate mobility information, the degree of strictness with which governments adopted travel restrictions should be varied and adjusted from region to region over time, thereby tailoring precise intervention strategies for future waves and pandemics. 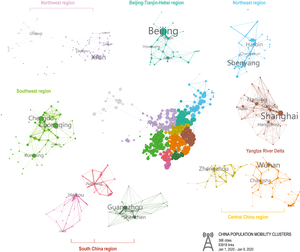