In dogs, just like in human infants, attachment is associated with reward-related brain responses to the caregiver's speech, according to a new study published recently in NeuroImage. Combining behavioural and brain data, Hungarian researchers at the Department of Ethology, Eötvös Loránd University, the MTE-ELTE Lendület Neuroethology of Communication Research Group and the MTA-ELTE Comparative Ethology Research Group revealed exciting similarities between dog-owner and infant-mother attachment.

Companion dogs develop a strong relationship with their owners:

they do not just love their human caregivers, they are attached to them.

That is, they use the owner as a secure base at unfamiliar places and as a safe haven in case of danger, just as we see it in infant-mother relationships. In children’s brains, attachment is associated with reward-responses. But what brain mechanisms can be associated with attachment in dogs?

To answer this question, Hungarian researchers combined behavioural and brain data of family pets. Dogs’ attachment behaviour towards the owners was assessed with the Strange Situation Test, and their brain activity was measured via functional magnetic resonance imaging (fMRI). In the MRI, dogs listened to praising and neutral (meaningless for dogs) speech spoken by their owner and a familiar person.

Click here to see the video abstract of this research.

“To study the brain mechanisms behind dog-owner attachment is particularly exciting, because it can help to understand how similar this unique bond between individuals of different species can be to other well-known relationships between conspecifics (e.g. infant-mother attachment). Some years ago we discovered that dog brains are sensitive to verbal praises, but it remained unexplored how the relationship with the speaker affects this sensitivity.” – Anna Gábor, lead author of the study, explains.

The current results show that

the reward center of the dog brain is more sensitive to the owner’s than to a familiar person’s praise.

“The basic function of attachment is to keep the dependent individual (infant, dog) in the proximity of the caregiver. Our results point out that

in dogs, just like in infants, not only positive interactions with the caregiver, but even listening to their neutral voice is rewarding.”

These findings reveal that dog-owner and infant-mother relationships are more similar than previously thought.

The study was funded by: 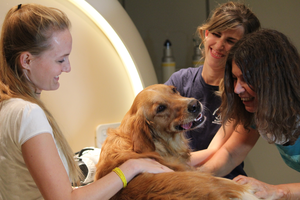 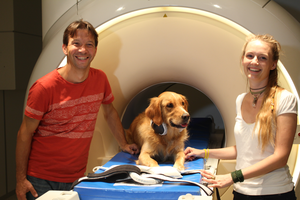 Trained dog with researchers at fMRI