Raman and infrared spectroscopies are important tools for chemical analysis at the molecular level, providing key information such as the chemical bonding of a system to be measured. However, Raman and IR spectroscopies often face the bottleneck issues of low sensitivity when applied to trace chemical analysis of materials and biological surfaces. Over the past four decades, significant efforts have been made to break this bottleneck and to promote the application and industrialization of related technologies.

In a new paper published in Light Science & Application, a team of scientists, led by Professor Zhong-Qun Tian from State Key Laboratory of Physical Chemistry of Solid Surfaces, Collaborative Innovation Center of Chemistry for Energy Materials, College of Chemistry and Chemical Engineering, Xiamen University, Xiamen 361005, China, have presented the development of surface-enhanced Raman and infrared absorption spectroscopies in three stages: (1) developing surface-enhanced Raman scattering (SERS) effect and surface-enhanced infrared absorption (SEIRA) effect to improve sensitivity, (2) designing optical excitation and collection optical systems to improve sensitivity, and (3) effective coupling between (1) and (2) to maximize the sensitivity. Starting with a brief history of SERS and SEIRA, this review outlines three physical mechanisms for enhancing spectral sensitivity by enhancing the local electromagnetic field, namely surface plasmons, the lightning rod effect and coulpling effect. Secondly, this review discussed the coupling mechanisms between nanoparticle-particle, particle-substrate, and probe-substrate. Thirdly, new strategies were proposed on how to optimize multiscale design of macro optics to micro/nanophotonics for achieving high excitation and collection efficiency in SERS and SEIRA , which significantly will improve the spectral sensitivity. Finally, the possibility of extending the efficient coupling between macro optics and micro-nano substrates to the atomic scale is discussed, and more multi-scale optical coupling strategies have prospected.

However, ultra-sensitive SERS and SEIRA mainly focus on a few molecular systems with large scattering or absorption cross-sections, and these substrate structures also face many difficulties in practical applications. How can we make the regular SERS or SEIRA substrates gain the ultrahigh sensitivity, so that effective signal can be obtained even for molecules with small scattering or absorption cross-section on the substrates such as single SHINERS particle, TERS probe, single SEIRA rod, and nanoIR probe? In recent years, research on the design of macroscopic optical systems for specific micro-nano substrates has shown great potential. A few macro optics, such as ATR optics, waveguiding optics, fiber optics etc.,  has been proved effectively improving the sensitivity of SERS and SEIRA substrates. The multiscale coupling efficiency have been focused between macro optical systems and micro-nano substrates. In the next 3-5 years, we believe that even the commonly and widely used spherical nanoparticles have the opportunity to achieve a further order of magnitude improvement in the sensitivity.

Furthermore, in addition to the coupling design of macro and micro/nano-optics, the combination of lightning-rod effect and surface plasmonics at atomic scale has achieved a series of breakthroughs in recent years, such as the imaging of single-molecule and even a single chemical bond with TERS. However, detectable molecular systems are still limited to a small number of molecular species. Therefore, it is necessary to improve the coupling efficiency not only from macroscopic optics to micro-nano optics but also from micro-nano optics to atomic optics. The solution to this problem is very important not only for TERS but also for nanoIR.

In practical applications, the environmental universality of SERS and SEIRA is also an important factor. Especially in TERS and nanoIR, great significance has been foreseen to develop optical structure design suitable for a specific application such as electrochemical multiphase interface systems and life science in liquid environment.

Advances of SERS and SEIRA: from nano/micro-structures to macro-optical design 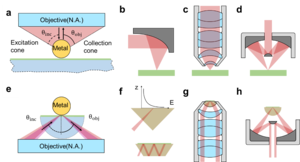 Macro optics for SERS and SEIRA