Working animals, such as horses, military and sheep dogs or logging and tourism elephants, spend hours each day in close contact with humans and require training to understand commands and fulfil specific tasks. Training can last from several months to years depending on the species, the training methods, and the tasks required. The ability to work in different situations is important for the safety of working animals and humans alike.

“We found that when novelty is involved in a working context, the elephant’s familiarity with its handler can affect their willingness to co-operate: elephants who had worked with their mahout, or elephant handler, for over a year performed better in a new work task than those elephants who had a shorter relationship with their handler. This difference does not appear when there was no novelty involved,” says Doctoral Candidate and the lead author of the study Océane Liehrmann from the Department of Biology at the University of Turku.

“The elephant and his mahout (the elephant handler) develop a working relationship that traditionally lasted for a lifetime. However, the mahout profession and culture are threatened nowadays with many mahouts leaving for more profitable and less demanding jobs in city industries,” says Doctoral Candidate Jennie Crawley, who participated in the study.

Working animals usually have daily routines. However, animals’ handlers must be able to anticipate their animals’ reactions to unusual circumstances (e.g. novelty or scary situations). By gaining an understanding of their behaviour and developing strong bonds over time, handler-animal relationships can improve. Today, elephants often face frequent changes of mahouts, and mahouts are younger and lack experience. Therefore, it is important to understand the mechanisms governing the mahout-elephant relationship and to investigate how the frequent mahout changes affect the quality of their interactions.

Timber elephants begin training at the age of five and enter work force at eighteen. The researchers found that during the control test, elephants responded to the call of their mahout and joined them easily when they were 18 years or older and had finished their training. However, when the novel surface was added to the task, they observed that older elephants actually tended to be more reluctant to cross the novel surface. This finding corroborates several other studies suggesting a decrease in curiosity with age.

“Further investigation is needed to gain a better understanding of the mechanisms underlying human-animal comprehension. This information should be integrated into management to adjust animal training methods and working habits, reduce stress and conflicts, and ultimately improve working animals’ welfare and performance, as well as the security of both handlers and animals,” concludes Océane Liehrmann. 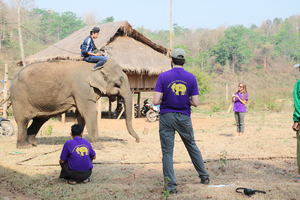 researchers observing an elephant with its handler 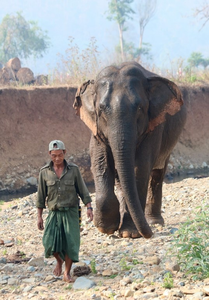