Wingtips of certain species of silkmoth are structured to reflect sound and throw off attackers, according to a new study.

Researchers at the University of Bristol have discovered that the tips of some saturniid moth forewings are curiously rippled and folded. They found that these unique structures strongly reflect sound, meaning that a bat hunting using echolocation is more likely to attack the wingtip region of the moth over the body, potentially saving the moth’s life.

They also discovered that the ripples and folds of the forewing tips have evolved to act as hemispheric and corner retroreflectors respectively, meaning that they reflect sound strongly back to its point of origin. Coupled together, the folds and ripples of these wingtips cover a huge range of incident sounds angles, meaning that over the entire wingbeat cycle of a flying moth and most possible positions of an attacking bat, the wingtip would consistently produce the strongest echoes. The acoustic protection of wingtips is even stronger than that of common hindwing decoys.

Prof Marc Holderied of Bristol’s School of Biological Sciences explained: “We have demonstrated that the folded and rippled wingtips on the forewings of some silkmoths act as acoustic decoys.

“Structurally, the wingtips act as acoustic retroreflectors, reflecting sound back to its source from numerous angles, meaning a bat would be more likely to strike the wingtip over the more vulnerable body of the moth.”

The findings, published today in Current Biology, are the latest revelation in the bat-moth acoustic arms race - the battle between bats which hunt moths using echolocation, and the subsequent evolution of different defensive strategies amongst moths to increase their chances of survival.

Towed acoustic decoys are a well-established defense amongst some silkmoths. These species have evolved elongated hindwings which terminate in a coiled and twisted end. The morphology of these elongated hindwings means that they generate very strong echoes, so much so that they will often divert a bat’s acoustic gaze towards them, away from the exposed body of the moth, causing the bat to strike the expendable tail of the moth or miss the moth all together.

Lead author Dr Thomas Neil said: “There are many silkmoths that do not have these elongated hindwings, and we were interested in how they might protect themselves from bats. Through our research we discovered that there are many silkmoths that have rippled and folded structures not on the tips of their elongated hindwings but on the tips of their forewings. These resembled the twisted hindwing structures seen in other moths and so we wanted to know if they might also serve as an acoustic decoy to thwart a bat’s attack.

“Conclusive support for the idea that the forewing reflector is an acoustic decoy comes from our finding that acoustic forewing decoys always evolved as an alternative to acoustic hindwing decoys, with there being no species known to possess both.”

Now the researchers will try and collect behavioral data to corroborate their findings in the lab. They plan to monitor bats and moths with varying levels of folded wing morphologies to see how much of a survival advantage it really gives them.

Prof Holderied added: “The results of this study introduce another exciting aspect to the story of the bat-moths acoustic arms race. We have identified a novel form of acoustic defense amongst silkmoths which may give them an advantage over hunting bats. Wider implications might include improved man-made anti radar and sonar decoy architectures.” 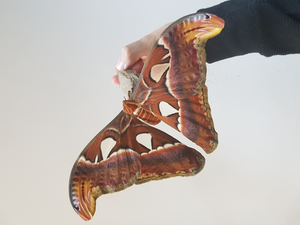 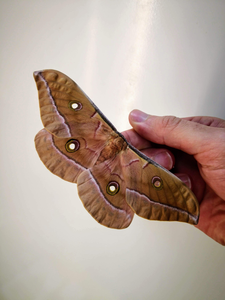