"It proved biological process observation is important to the study of biological effects,” said Prof. HUANG Qing, who led the research group. They are from Hefei Institutes of Physical Science, Chinese Academy of Sciences (CAS).

The result has been published in iScience.

In the end, they found that there was a significant enhancement of mitochondrial biogenesis in the early stage of radiation apoptotic cells, that is, mitochondrial biogenesis in early stage cells under certain conditions was positively correlated with apoptosis occurring at a later stage. This result revised the previous generalized notion of negative correlation between them.

This work not only provides an effective method to study mitochondrial biogenesis, but also demonstrates how biological effects can be properly assessed at the right time points, highlighting the importance of the observation of dynamic processes in living cells.

New study reveals the relationship between mitochondrial processes and apoptosis 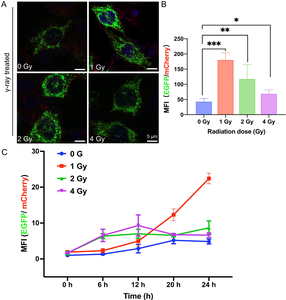 New Study Reveals the Relationship Between Mitochondrial Processes and Apoptosis