Researchers at Kobe University’s Biosignal Research Center have successfully developed plants that can be used to detect organic pollutants, such as polychlorinated biphenyls and endocrine-disrupting chemicals, which contaminate soil and water.

The team consisted of Petya Stoykova, recipient of a Japan Society for the Promotion of Science (JSPS) Postdoctoral Fellowship for Research in Japan (now a researcher at Bulgaria’s AgroBioInstitute), Kobe University Professor Emeritus OHKAWA Hideo and Professor INUI Hideyuki.
Next, they hope to use plants to develop convenient and inexpensive technology for monitoring toxicity.

These research results were published online in two papers, which appeared separately in the Journal of Plant Physiology on June 29 and the Chemosphere on July 22.

*A type of chemical receptor. Please see below for more information.

Research Background
Various kinds of organic pollutant exist in our surrounding environment. Well-known examples include polychlorinated biphenyls (PCBs) that were used in florescent lights and carbonless copy paper, organofluorine compounds that are used to make things water- and cooking oil-resistant, such as food packaging and kitchen utensils, and alkylphenols, used as precursors for detergents and other products. These organic pollutants have been released into the atmosphere, rivers and soil, and the elements resistant to decomposing have been ingested by fish, livestock and crops, resulting in these pollutants accumulating inside our bodies as their levels have risen in other species. Increased concentration inside the body results in various harmful effects such as cancer, fetal abnormalities and immunotoxicity.

In order to prevent pollutants ingested via food from accumulating inside the human body, it is necessary to monitor contaminant levels in the environment, including water systems (rivers, lakes, oceans), fish species, the atmosphere, soil and crops. The results enable us to understand the type and concentration of pollutants in an area. This will allow appropriate measures to be put in place; for example the avoidance of growing crops where ground pollution is detected and the conduction of contamination tests on fish caught in rivers that are found to be polluted. In other words, this will enable measures to be chosen and implemented in order to mitigate the adverse effects of pollutants on humans.

Environmental monitoring is the investigation of the type and concentration of pollutants in an environmental sample; this involves multiple processes. For example, to investigate a soil sample, it is necessary to add an organic solvent and then extract the chemical substance from the soil sample after heating it overnight. Next, the integrated organic solvent and chemical substance are removed from the soil and concentrated sulfuric acid is added to remove pigmentation. The concentration of organic pollutants in the sample is very low, so it is necessary to condense the extracted substance so that it reaches a concentration that is possible to analyze. Subsequently, this condensate is processed through multiple separation columns (*1) and the contaminants are eluted from the columns using organic solvents that correspond to the properties of the specific contaminants. Next, it is necessary to remove impurities from the sample in order to extract only the target pollutant. This is called purification. This series of steps (extraction, concentration and purification) is collectively called pretreating, and needs to be carried out in order to analyze trace amounts of organic pollutants in a sample.

Lastly, analytical chemistry techniques such as gas chromatography-mass spectrometry (GC-MS) and liquid chromatography–mass spectrometry (LC–MS) are applied to the pretreated sample. By analyzing the resulting spectral data indicating the presence of contaminating substances, it is possible to determine the type (speciation) and concentration (fixed quantity) of pollutants in the sample.

Environmental monitoring is carried out according to the official analytical methods (*2) of each country and this plays a vital role in the identification and quantification of organic pollutants. However, the pretreatment stages require large amounts of sulfuric acid and various types of volatile organic solvent to be used, and this exposure is hazardous for those carrying out the processes.

A more proficient technique is therefore necessary in order to turn the miniscule contaminant quantities found in environmental samples (that have undergone complex pretreatment) into specimens that can be analyzed. Furthermore, the use of expensive apparatus such as GC/MS and LC/MS (which can cost between hundreds of thousands to millions of US dollars) increases the cost of the analytical process. In order to obtain an accurate assessment the extent of contamination, it is necessary to obtain numerous environmental samples. However, it is only possible to analyze a few representative samples due to the prohibitive costs of current methods. Although instrumental analysis is suitable for determining the type and concentration of each pollutant in an environmental sample, this method cannot tell us how toxic each pollutant is, nor the overall toxicity of multiple pollutants in a single sample.

Research Methodology and Findings
In response, this research team developed a monitoring method that is completely different to previous methods, which require pretreatments and expensive apparatus in order to determine the type and concentration of pollutants in an environmental sample.

Animals have proteins called chemical receptors (*3), which recognize and intercept chemical substances that penetrate the cells from outside the body. When a receptor binds to a foreign substance inside the cell, it activates the transcription of a specific gene. The regular function of the protein created by this gene is to react with the foreign substance and excrete it from the body.

One example of this kind of receptor is AhR (Aryl hydrocarbon receptor). Inside the cells, AhR binds to dioxins and PCBs from contaminated food. Then it creates an enzyme that can turn these into substances that are easily dissolved in water, thus promoting their excretion from the body. Therefore, AhR plays an important role in indicating whether or not dioxins and PCBs are toxic to animals.

In addition, the estrogen receptor (ER) responds to hormones created inside an animal’s body and is involved in the expression of important genes for morphogenesis and growth. ER binds to the female hormone estradiol and strictly regulates the timing and amount of genetic transcription activation for the protein that should be produced in response to the hormone. However, if ER instead binds to an endocrine-disrupting chemical (*4) that has entered the body via food or water, then this disrupts the timing and level of gene transcription activation, resulting in detrimental effects.

Plants, on the other hand, are unable to move once they have taken root, so their roots spread out underneath the ground in order to obtain the necessary nutrients for growth. They are able to absorb sufficient nutrients even when concentrations are low because they continue to extend their roots. In other words, plants have the ability to accumulate chemical substances that are absorbed from the soil via their roots.

This research team came up with the idea for a method to monitor environmental contamination, which involves introducing animal-origin chemical receptors into a plant, and using them to detect pollutants absorbed by the plant. They created an AhR plant for PCB monitoring and an ER plant for monitoring endocrine-disrupting chemicals. When these plants were grown in soil and cultures that contained the respective contaminants, the pollutants taken up by the roots bound to the receptors inside the cells, activating the transcription of the reporter gene. Thus it is possible to monitor pollutants by detecting this reporter (Figure 1).

AhR plants can detect CB126, which is the most toxic PCB (Figure 2A), as well as other types (CB77, CB118) (Figure 4). On the other hand, ER plants can detect octylphenol (OP, a type of alkylphenol) (Figure 3A) in addition to the female hormone 17ß-estradiol, the insecticides fipronil and imidacloprid, and the organofluorine perfluorooctanesulfonic acid (PFOS) (Figure 4). It is known that these chemicals are contaminating soil and water systems. The research team found that these plants demonstrated albinism and structural abnormalities such as shorter roots when pollutants were present (Figure 2B, 3B). This indicates that it is possible to detect pollutants in an observable way that is even simpler than reporter detection.

The results of this research show that collecting large environmental samples for monitoring is unnecessary and that it is possible to detect contaminants using small amounts of soil (a few grams) or water (around 10 or so milliliters). Furthermore, it is possible to investigate whether an environmental sample contains toxic chemical substances with the monitoring method that uses chemical receptors to indicate toxicity.

Further Research
For the environmental monitoring of organic pollutants, it is vital to collect as many samples as possible in order to accurately understand the extent of the pollution. However, it is not possible for numerous samples to be analyzed under current official methods due to the amount of time and money this would require. The method that this research team has developed is far simpler, and merely requires plants to be cultivated with a small sample of soil and water, and the presence of pollutants to be assessed via reporter detection and plant growth observation. Furthermore, it also enables the toxicity of pollutants not covered by official methods to be evaluated. Therefore, this new method would be suitable for screening numerous environmental samples prior to the confirmation of the type and concentration of pollutants according to official analytical methods.

In this study, the researchers have demonstrated that it is possible to monitor PCB and environmental hormones by introducing AhR and ER into plants. However, animals have many other chemical receptors aside from AhR and ER. This should consequently make it possible to apply this method to the toxicity monitoring of other chemical substances by introducing different types of receptors into plants.

Glossary
1. Separation column:
This is a tubular apparatus packed with stable materials such as alumina or silica, which are used as an adsorbent. It is possible to separate or elute chemical substances depending on the adsorbent nature of the vector and the characteristics of the organic solvent to be eluted.
2. Official analytical methods:
These are organic pollutant extraction and analysis methods defined by a country’s environmental ministry to accurately determine the type and concentration of these contaminants in soil, water, organisms and the atmosphere. Based on these methods, organic pollutants are strictly regulated by type.
3. Chemical Receptor:
These are proteins found in organism cells that bind to chemical substances and promote or control the expression of the gene required for the organism to respond to the chemical substance. Aside from the estrogen receptor (ER) that responds to the female hormone and the aryl hydrocarbon receptor (AhR) that responds to dioxins, there are many other known receptors for various hormones.
4. Endocrine-disrupting chemicals (EDCs):
These are chemicals that disrupt animals’ endocrine systems. They enter the body via the environment (eg. through food consumed by the animal), therefore they are also called environmental hormones. These hormones have detrimental effects on animals, including binding to receptors (which prevents the receptors from binding to hormones produced by the body) and causing the amount of receptors to fluctuate. Bisphenol A, 4-nonylphenol and 4-t-octylphenol are known to have endocrine-disrupting effects on the fish species medaka.

Acknowledgements
This research was supported by a Grant-in-Aid for Scientific Research (KAKENHI, no. 17F17748) and a Postdoctoral Fellowship for Research in Japan (standard, P17748) both from the Japan Society for the Promotion of Science (JSPS). It also received support from the Bio-oriented Technology Research Advancement Institution (BRAIN). 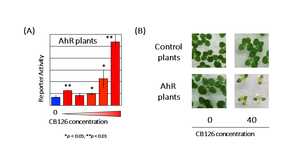 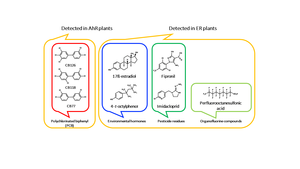