Understanding the environmental conditions under which early humans dispersed out of Africa is important for understanding the factors that affected human evolution. This is a topical question that remains debated. A recent study prepared in collaboration with researchers from the University of Helsinki and the Universities of Granada, Tarragona, Zaragoza, Barcelona, Salamanca, Madrid and Tübingen provides new information on the environmental context of earliest human occupation in Europe during the Pleistocene.

The research is part of the Orce project (ProyectORCE) funded by the local government of Andalucía and led by the University of Granada, in which researchers from the University of Helsinki have been participating since 2017. The project is responsible for archeological/palaentological excavations and related research in Andalucía, Spain.

The study is focussed on the Guadix-Baza Basin, Andalucía, Spain, where the researchers used dental ecometric trait distribution within fossil large mammal communities to reconstruct climatic variables and net primary production of plant communities from ca. 4.5 million years to ca. 400 000 years ago.

The Guadix-Baza basin is of particular importance for understanding early human environments outside Africa, because it includes a couple of sites that are among the earliest human occupation sites in Europe, Barranco León and Fuente Nueva 3 near the city of Orce, which have been dated at ca. 1.4 – 1.2 million years in age.

Based on the estimates, the climate in the Guadix-Baza Basin varied from roughly similar to present (e.g. Venta Micena, ca. 1.6 million years ago) to more humid, with higher annual primary production. The early human occupation sites in the Guadix-Baza Basin, such as Barranco León and Fuente Nueva 3, tended to have higher primary production than in the region today. The vegetation was mostly similar to Mediterranean forest without significant grassy undergrowth, making it different from African grass-dominated savanna environments.

Lead author Juha Saarinen from the University of Helsinki https://www2.helsinki.fi/en/people/people-finder/juha-saarinen-9084218 said: "Tooth wear-based dietary analyses indicate that most of the large herbivorous mammals in these environments did not consume significant amounts of grass, further attesting to the scarcity of grassy vegetation. This is an important finding, as it suggests that already the earliest human occupation sites in Europe were often different from African grassy savannas in terms of vegetation and interactions between large mammal fauna and vegetation”.

The conditions under which early members of the genus Homo dispersed outside Africa were also analysed on a broader scale, across Europe during the Early and Middle Pleistocene. The model is based on the comparison of functional trait distribution of large herbivorous mammals in sites with archaeological or fossil evidence of human presence and in sites, which lack evidence of human presence.

Based on the results, early humans occurred in a wide variety of environments, but were concentrated in sites where the distribution of functional traits suggests a relatively mild climate and diverse, at least partially wooded, environments, especially in the early phase of dispersal. Further, at a later stage, after humans had already established themselves in Europe during the Middle Pleistocene, humans were absent from some sites where mammalian characteristics suggest particularly severe (cold, dry, or both) conditions.

Pliocene to Middle Pleistocene climate history in the Guadix-Baza Basin, and the environmental conditions of early Homo dispersal in Europe 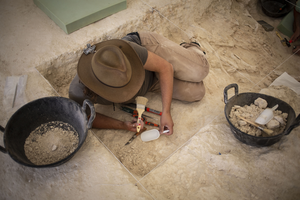 Juha Saarinen working at the excavations in Orce, Andalucía.