Protecting areas of the ocean and coastlines with “whole-site” Marine Protected Area (MPA) status can result in four-fold increases in the abundance and diversity of fish populations, a new study has shown.

Researchers from the University of Plymouth have been monitoring the impact of the Lyme Bay MPA since it was designated in 2008.

They found the number of different fish species inside the controlled zone is now more than four times (430%) greater than found outside the MPA’s boundaries.

In terms of overall abundance, there are 370% more fish to be found within the MPA than in similar areas outside it where bottom-towed fishing are still permitted.

The study also showed the range of commercially important fish species outside the MPA rose over the 11-year period following the designation.

Taken together, they say it demonstrates the importance of implementing whole-site protection for marine habitats – where the most the destructive activities such as scallop-dredging are excluded from the whole MPA – and how such a practice can benefit and maintain sustainable fisheries and species of conservation importance.

The study, published in the Journal of Applied Ecology, is the result of regular monitoring using underwater video cameras.

Every year, researchers have recorded baited video surveys inside and outside boundaries of the MPA to monitor the area’s fish population.

Over 11 years, that has resulted in sightings of more than 13,000 individual organisms ranging from small scavenging invertebrates such as whelks, starfish and hermit crabs to large, highly mobile predatory vertebrates such as sharks and rays.

Bede Davies, who is currently completing his PhD at the University of Plymouth, is the study’s lead author. He said: “This research is the culmination of years of hard work and collaboration between researchers from the University and the fishers of Lyme Bay. It shows how the compromise between conservation and fisheries management can affect whole ecosystems, local habitats and those who rely on them. It also highlights the need for long term monitoring of MPAs and that, when managed appropriately, they can provide significant benefits to fisheries and conservation.”

The Lyme Bay MPA was the UK's first and largest example of an ambitious, whole-site approach to marine protection, which was designed to manage, recover and protect reef biodiversity by considering the whole ecosystem.

It has excluded bottom-towed fishing across 206km2 of waters off the southern coast of England, protecting a mosaic of habitats from regular damage, while still allowing less destructive fishing methods, such as static gear, rod and line, and diving.

The University’s work in Lyme Bay, which has been funded at various stages by Defra, Natural England, the European Maritime and Fisheries Fund and the Blue Marine Foundation, has been carried out in conjunction with local fishers and other community groups along the Dorset and Devon coastline.

She added: “Globally, the implementation of MPAs has increased rapidly over the last 25 years. They are a key element of international plans to protect and preserve the ocean however, as things stand, only 7.9% of the world’s ocean is covered by such protection. Our ongoing work in Lyme Bay has shown the positive effects of addressing that, and in the face of the global climate and biodiversity crises the need to do so has never been more pressing.”

Ecosystem Approach to Fisheries Management Works: how switching from mobile to static fishing gear improves populations of fished and non-fished species inside a Marine Protected Area 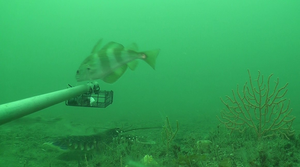