You can’t squeeze water from a rock. But tree roots can —and they’re doing it more frequently than scientists previously thought.  In a study published in Nature, SFU Geography’s Jesse Hahm and a team of researchers from the University of Texas, Austin, and the US Forest Service found that bedrock is a regular source of water for trees across the United States, not just an emergency reserve during droughts.

The discovery overturns long-held assumptions about where trees get their water and is leading to new ideas about how forest ecosystems function. It also demonstrates the necessity of accounting for rock moisture—the water clinging to cracks and pores in bedrock, below the soil.

“This finding tells us that if we want to understand how forests will fare in a warmer, drier climate, we need to take a harder look at bedrock as a water source,” said Hahm.

For more than a century, scientists around the world have been documenting trees’ rooting into bedrock. But these roots have largely been treated as a curiosity. And although experiments at field sites have provided direct evidence of trees tapping rock moisture and relying on it during droughts, questions remained about how extensive this phenomenon may be.

By combining public data sets that tracked precipitation and evaporation in forests from 2003 to 2017 with field studies in Texas and California, the researchers found that trees tapping bedrock is far from rare: It’s happening across the US, with the scientists detecting the behavior in about 24% of forests and shrubland —an area greater than the size of Texas.

In addition to providing a cross-country view, the study presents data from individual field sites in Central Texas and California showing that rock moisture can outdo soil as a water source. For example, at six sites in California and two in Central Texas, more than 50% of water released by trees came from rock moisture. At most of these sites, the rocks held significantly more water than soil did—up to 10 times as much.

The discovery also motivates expanded study of the role of bedrock as a water source in British Columbia, says Hahm. “Dry summers, like the one we just experienced, are expected to become more common in the future in southern BC. That means trees will rely more on stored water belowground, including water in bedrock.”

The study was led by Erica McCormick, a research assistant in the Jackson School of GeoSciences at the University of Texas Austin.  Co-authors from the School include Daniella Rempe, assistant professor, graduate students Alison Tune and Logan Schmidt and research scientist Dana Chadwick, along with David Dralle, a research hydrologist with the U.S. Forest Service Pacific Southwest Research Station, and Jesse Hahm, an assistant professor at Simon Fraser University.

This release was adapted from the Jackson School of GeoSciences at the University of Texas at Austin release.

Could the water in bedrock save our forest ecosystems from climate change? 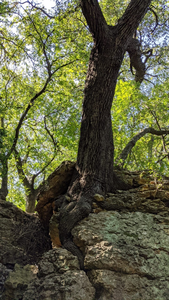