Seismic instruments generally have a built-in navigation-grade single-mode GPS receiver. During the operation of the station, while recording seismic data, the equipment also records the location of the station at regular intervals. Broadband seismic instruments generally record the locations of stations every hour (or every day), while short-period seismometers often record the locations of stations at shorter intervals (for example, every ten minutes). Although the positioning accuracy of these single-mode GPS receivers is not as good as that of geodetic GPS, it is still possible to measure the ice flow velocity through single-mode GPS data collected over a sufficiently long period

During the 36th Chinese National Antarctic Research Expedition (CHINARE36) in 2019/2020, we deployed 100 short-period three-component seismometers (SmartSolo-BD3C-5) in the Larsemann Hills, East Antarctica; in addition, 4 short-period seismometers were deployed at Taishan Station. The recording length was approximately one month, and each station recorded more than 4000 GPS location observations while recording seismic data. We found that when the seismic station is located on bedrock, for both longitude (Figure 1a) and latitude (Figure 1b), the distribution characteristics do not change over time. However, when the seismic station is located on an ice sheet, its longitude distribution (Figure 1c) characteristics shift over time, while the latitude distribution (Figure 1d) only slightly changes. This implies that seismic station 250 on the ice sheet moved westward over time.

For seismic station 251 located on bedrock, the GPS location data are divided into five segments at a time interval of 6 days. In Figure 2a, the GPS location coordinates of different time periods are represented by red, green, blue, yellow, and cyan, and the corresponding average value of each segment is represented by a large circle. Theoretically, when the seismic station is located on bedrock, the displacement is zero; however, the calculated maximum displacement in Figure 2a is approximately 0.2 m. Therefore, the error of tracking the ice sheet flow through the position data from the single-mode GPS receiver embedded in the short-period seismograph is approximately 0.2 m/month. Figure 2b shows the GPS position coordinates of seismic station 250 located on the Larsemann Hills ice sheet in different time periods. As time passes, its average position moves approximately 1 m westward. 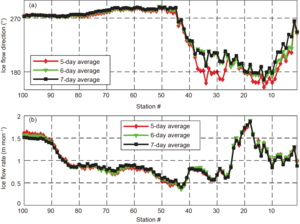