Invisible lines marked on maps are hindering current efforts to conserve the world’s marine species such as sea turtles, according to University of Queensland research.

The study looked at more than 28,000 distribution maps of the world’s marine species and found more than 90 per cent lived in or travelled through at least two political jurisdictions, with 58 per cent covering more than 10 jurisdictions.

“We try to fit nature into our abstract concept of borders, for instance protecting a species in one country but those protections end as soon as it crosses into the neighbouring country,” she said.

“This is a problem for nature conservation on land, but it is an even bigger problem in the ocean because the lines we draw on the map make even less ecological sense in the water.

“For example, most sea turtle species are threatened and migrate across country borders.

“If one country has exceptional conservation protections but its neighbours are catching turtles as bycatch, increasing plastic pollution or simply hunting them, then the species can be compromised overall.

“The extent to which some species span multiple jurisdictions proves how important it is for marine conservationists to not only consider their own country, but their neighbours and their neighbour’s neighbour.”

“This is true for big animals that we know can move around a lot, like orcas, which occur in 220 countries, but also for a lot of smaller and less flashy species like seagrasses, corals or crabs,” Dr Klein said.

“Even if the individual animal or plant doesn’t move much, these species are found in many countries and are connected across large distances because how things like food, disease, pollution and eggs move in the ocean.

“Individual countries are responsible for managing and conserving marine species that occur within their own boundaries.

“This means that effective conservation of transboundary species requires coordination among countries – collaboration and the sharing of resources and knowledge between nations and industries is the most effective way to develop and implement marine conservation solutions.

“We need to combine many sources of knowledge about the ocean, such as fishing, mining and shipping industries, the military and traditional scientific data across all jurisdictions if we’re to make meaningful impacts.”

Dr Roberson said Australia’s ocean territory was one of the most important places on Earth when it came to conservation efforts because of its vast number of local and transboundary species.

“There are a lot of changes happening in Australian waters right now that will inhibit the successful conservation of these transboundary species including increasing threats from mining, oil and other industries,” she said.

“What Australia chooses to do with its ocean doesn’t only affect Australia – it’s critical for the biodiversity we share with Indonesia, Papua New Guinea, New Zealand and countries around the world.”

Multinational coordination required for conservation of over 90% of marine species

Love thy neighbor is key to ocean conservation 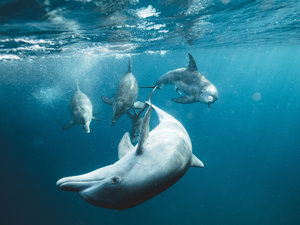