When water is sprinkled into a really hot frying pan, the droplets levitate just above the pan’s surface, sliding across it on vapor layers. This odd physical phenomenon, known as the Leidenfrost effect, was first described nearly three centuries ago, but many mysteries remain about its characteristics.

Physicists at Emory University developed an electrical technique to study the phenomenon, which is important to a range of industrial and natural processes. They used their method to explain the surprising robustness of Leidenfrost vapor layers in water once it forms at around 240 degrees Celsius, and pinpointed the temperature — 140 degrees Celsius — at which the vapor layer explodes and collapses.

“In a sense, this paper is about the physics of failure,” Burton says. “We’ve shown that Leidenfrost vapor layers can be sustained at much lower temperatures than those required for their formation. And the explosive failure point is nearly independent of material and fluid properties, contrary to previous theories. Instead, it appears that a purely hydrodynamic mechanism determines this threshold.”

The Leidenfrost effect is named after German doctor Johann Gottlob Leidenfrost, who first described it in “A Tract About Some Qualities of Common Water” in 1751. Just before water touches extremely hot metal, the droplets instantly vaporize and the resulting gas keeps the droplets suspended above the hot surface.

Steam boilers and water-cooling systems for nuclear reactors are among the industrial processes related to the Leidenfrost effect, which also underpins interactions between a range of liquids that come into near contact with surfaces much hotter than their boiling points.

In nature, Leidenfrost vapor layers can form at the interface between water and magma ascending from an undersea volcano. The effect has even been observed on Mars, not in a liquid but in solid chunks of frozen carbon dioxide that “surf” down Martian dunes on a dry ice vapor. Some researchers have proposed that energy harvested from a carbon-dioxide fueled “Leidenfrost engine” could one day power a human settlement on the Red Planet.

Among the conundrums about the Leidenfrost effect is the wide range of temperatures involved during the process. Various experiments with water, for example, have shown a span of about 100 degrees Celsius for the existence of the vapor layers. Some have theorized that this range is dependent on different types of metal surfaces, and even the salt content of the water.

The Burton Lab, which focuses on the fluid mechanics of complex systems, decided to investigate these theories.

A key challenge was precisely characterizing the vapor layers, which occur at brief timescales and suspend the water only millimeters from a surface. Most previous research has focused on measuring temperature and filming the flux between a liquid and metal surface.

In order to apply the method, Harvey built an experimental setup from scratch. Working in Emory’s machine shop, he created metal “fingers” less than an inch in diameter out of titanium, copper and brass. He coated the cylinders in 10 microns of gold plate to prevent the metals from corroding.

Harvey then ran a series of experiments. The cylinders were heated and submerged into water baths containing an electrode. As the Leidenfrost vapor layers formed, they acted as a capacitor, where one plate is the electrode and the other is the surface of the metal cylinder. The amplitude and temperature were monitored throughout formation of the vapor layers to their explosive demise as the system naturally cooled. The process was also captured in high-speed video.

“We’ve demonstrated that it’s the hydrodynamic stability of the vapor layer itself, and not material properties, that appears to keep it stable and prevents it from collapsing in on itself,” Harvey says. “As soon as the system gets below 140 degrees, the vapor layer is going to fail and there is no way to stop that from happening.”

What exactly triggers the collapse remains an open question, he adds.

The high-speed electrical technique the researchers designed can be applied to continue to probe the mysteries of the Leidenfrost effect and further characterize it.

“This work provides a new way to understand ‘how low can you go’ with Leidenfrost levitation,” Burton says. “For both experimental and industrial purposes, understanding the dynamics of this failure point is important.”

Joshua Mendez Harper, a former Emory post-doctoral fellow, is co-author of the paper. The research was supported by the National Science Foundation. 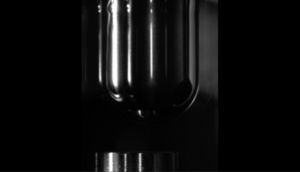