Pre-COVID-19 pandemic, University of Ottawa biology student Megan Reich enjoyed the road trip of a lifetime, crisscrossing the east coast of the United States in search of a specific thrill: Milkweed.

Milkweed is the host plant to the monarch butterfly and Megan wanted to compile a diverse sampling of it to run an isotope ratio analysis that would build a map to show how the isotopes vary over landscape. This would help her pinpoint where her monarch samples had hatched and, perhaps, better understand the migratory routes of this endangered insect.

Megan’s trip took 74 days, traveling 20,000 kilometres over 22 states to collect samples with the help of teachers, state and federal biologists, city employees, campground owners, and farmers. She has now published a research paper demonstrating how mapping strontium isotopes can greatly improve the ability to track these important insects.

“In this study, we show that strontium isotopes, particularly when combined with hydrogen isotopes, can help researchers pinpoint where a monarch butterfly hatched to a more precise area. We then used the new tool by applying it to a sample of monarchs to see where they originated.”

Tracking monarch butterflies, which are small-bodied and traverse thousands of miles over international borders, is an expensive and difficult task. Recovering tagged monarchs is rare.

Understanding the migration routes of an insect that transports biomass, nutrients, pollen, genetic information, and ecosystem services across a continent is critical, especially to understand why this butterfly’s population numbers have been declining.

“Isotopes are atoms of the same element that have the same number of protons and electrons but have a different number of neutrons, which makes them have different masses. The ratios between heavy and light isotopes vary spatially on the landscape,” explains Megan.

“Up until now, mainly hydrogen isotopes have been used for tracing the natal origin of monarch butterflies and have provided critical information relevant to monarch conservation. Unlike a radio collar which could tell you exactly where an animal travelled, hydrogen isotopes can only tell you the general area where the tissue was formed. In this study, we show that strontium isotopes, particularly when combined with hydrogen isotopes, can help researchers pinpoint where a monarch butterfly hatched to a more precise area – about four times better.”

“In the case of monarchs, multiple reasons for the population decline have been suggested, including deforestation and extreme weather events, loss of habitat on the summer breeding grounds, mortality during the southward migration, increased parasitism, and the effects of climate change,” says Megan, who collaborated with colleagues at the University of Guelph and the University of Maryland’s Center for Environmental Science in this research.

“To understand the relative contribution and strength of these drivers, we need a better understanding of monarch migratory connectivity and patterns over time. We have now been able to establish a new, ready-to-use tool for researchers that will aid in the conservation of the monarch butterfly.” 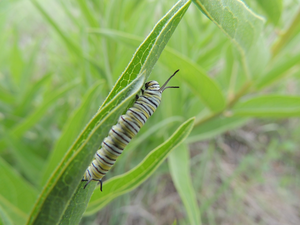 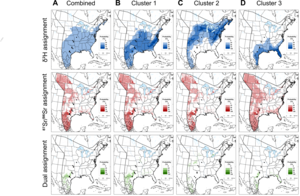 The averaged assignment maps for the 100 monarchs 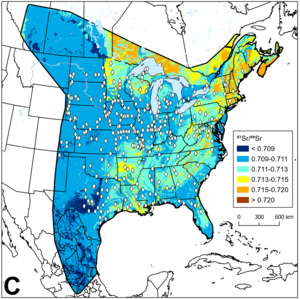 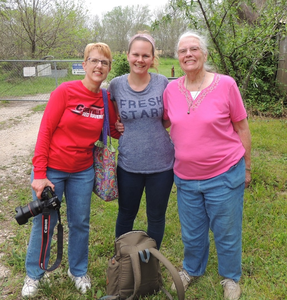