New research at the University of Alaska Fairbanks shows that the fluctuations of major wind and ocean circulation systems can temporarily accelerate or reverse the rate of ocean acidification in the Gulf of Alaska.

“We typically think of ocean acidification as this slow press onto the environment that gradually changes the carbon chemistry in the ocean,” explained Claudine Hauri, a researcher at the UAF International Arctic Research Center.

Instead, Hauri said, the research shows that the chemical conditions experienced by marine organisms can change on a daily and seasonal basis. This fluctuation occurs despite a long-term trend of ocean acidification connected to the steady rise in atmospheric carbon dioxide concentrations. The new research also documents massive cycles that happen every five to 10 years.

“Chemical conditions will deteriorate for several years in a row in offshore areas, before stabilizing or even slightly improving again,” said co-author Andrew McDonnell from the UAF College of Fisheries and Ocean Sciences. “We don’t know exactly how organisms respond to that, but in general some organisms are sensitive to these types of changes in environmental conditions.”

Hauri and her team examined ocean acidification through a model that combines physical, biogeochemical and hydrological ocean models to reproduce past Gulf of Alaska conditions from 1980-2013.

The study identified natural decadal fluctuations in chemical conditions that are driven by the strength of the North Pacific subpolar gyre.

This gyre is a large wind-driven system of circulating ocean currents affecting the Gulf of Alaska. When the gyre is strong, it brings more deep water rich in carbon dioxide to the ocean's surface. This can accelerate ocean acidification, creating extreme events that cause stress to sensitive organisms. When the gyre is weak, less carbon is delivered to the surface, which can dampen the ocean acidification effect or even reverse it.

From 2011 to 2013, the model showed a strong phase of the gyre resulted in an extreme ocean acidification event in the center of the Gulf of Alaska. This event preceded the 2014–2016 “blob” of exceptionally warm water in the same region.

Hauri emphasized that more research is needed to understand the consequences of multiple simultaneous stressors on marine ecosystems, and to identify how ocean acidification and climate change interact.

Another implication of this work is that multiple decades of observational data are necessary to separate out the long-term trend of ocean acidification from the natural variability driven by the strength of the subpolar gyre. This type of dataset does not currently exist for the Gulf of Alaska.

Hauri and her team hope that this work and the efforts it prompts will provide needed information for people engaged in subsistence and commercial fisheries as they plan and adapt for the future.

Natural cycles in the Gulf of Alaska accentuate ocean acidification 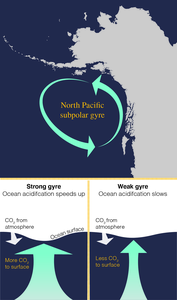 This graphic of the North Pacific subpolar gyre in the Gulf of Alaska shows how the strength of the gyre can speed or slow ocean acidification based on the amount of carbon dioxide brought to the surface of the ocean.