In times of exacerbating biodiversity loss, reliable data on species occurrence are essential, in order for prompt and adequate conservation actions to be initiated. This is especially true for freshwater ecosystems, which are particularly vulnerable and threatened by anthropogenic impacts. Their ecological status has already been highlighted as a top priority by multiple national and international directives, such as the European Water Framework Directive.

However, traditional monitoring methods, such as electrofishing, trapping methods, or observation-based assessments, which are the current status-quo in fish monitoring, are often time- and cost-consuming. As a result, over the last decade, scientists progressively agree that we need a more comprehensive and holistic method to assess freshwater biodiversity.

Meanwhile, recent studies have continuously been demonstrating that eDNA metabarcoding analyses, where DNA traces found in the water are used to identify what organisms live there, is an efficient method to capture aquatic biodiversity in a fast, reliable, non-invasive and relatively low-cost manner. In such metabarcoding studies, scientists sample, collect and sequence DNA, so that they can compare it with existing databases and identify the source organisms.

Furthermore, as eDNA metabarcoding assessments use samples from water, often streams, located at the lowest point, one such sample usually contains not only traces of specimens that come into direct contact with water, for example, by swimming or drinking, but also collects traces of terrestrial species indirectly via rainfalls, snowmelt, groundwaters etc.

In standard fish eDNA metabarcoding assessments, these ‘bycatch data’ are typically left aside. Yet, from a viewpoint of a more holistic biodiversity monitoring, they hold immense potential to also detect the presence of terrestrial and semi-terrestrial species in the catchment.

In their new study, reported in the open-access scholarly journal Metabarcoding and Metagenomics, German researchers from the University of Duisburg-Essen and the German Environment Agency successfully detected an astonishing quantity of the local mammals and birds native to the Saxony-Anhalt state by collecting as much as 18 litres of water from across a two-kilometre stretch along the river Mulde.

In fact, it took only one day for the team, led by Till-Hendrik Macher, PhD student in the German Federal Environmental Agency-funded GeDNA project, to collect the samples. Using metabarcoding to analyse the DNA from the samples, the researchers identified as much as 50% of the fishes, 22% of the mammal species, and 7.4% of the breeding bird species in the region.

However, the team also concluded that while it would normally take only 10 litres of water to assess the aquatic and semi-terrestrial fauna, terrestrial species required significantly more sampling.

“For that purpose, however, it is essential that eDNA data is jointly stored and accessible for different biodiversity monitoring and biodiversity assessment campaigns, either at state, federal, or international level,” concludes Florian Leese, who coordinates the project.

One water bucket to find them all: Detecting fish, mammals, and birds from a single sample 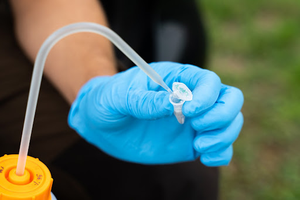 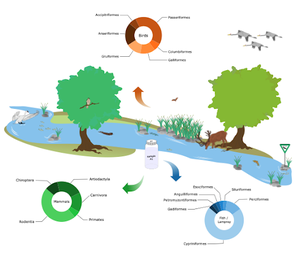