Usually, the individuals of a population of marine species that have the potential to disperse over long distances all share a similar genetic composition. Yet every now and then, at small, localised sites, small groups of genetically different individuals suddenly appear within populations for a short period of time. A new study explains how this chaotic formation of genetic islands can occur in marine molluscs. Scientists from Bielefeld University and the British Antarctic Survey collaborated on the research. Their study has appeared in Science Advances.

By studying the limpet Nacella concinna, the researchers have managed to attribute the genetic divergence of animal groups within a population to two factors. Using genomic data, data from drift buoys, and computer simulations they were able to prove that, in the case of the limpet, an entire generation of offspring had descended from an extremely limited number of parents and that the current had carried the larvae together to one location. ‘We have succeeded in bridging the gap between theory and how things are in reality,’ says molecular biologist Professor Dr Joseph Hoffman from Bielefeld University, who is one of the authors of the study.

First evidence for theoretical assumptions on the formation of genetic islands

Whether or not chaotic island formation occurs often depends on coincidences. ‘The dispersion of these types of organisms can be geographically limited and unstable over time,’ says Dr David Vendrami, Joseph Hoffman’s colleague and lead author of the study. ‘There are a great many theories that try to explain how these genetic islands occur,’ he says. ‘In practice, however, it has so far not been possible to attribute this to a concrete mechanism.’

The study is a collaboration between the Bielefeld researchers and colleagues from the British Antarctic Survey (BAS), the UK’s polar research programme, who collected the data on site. Professor Lloyd Peck PhD from BAS collected limpet samples while diving in Antarctica and together with Joseph Hoffmann came up with the idea for the study. ‘The limpet Nacella concinna is one of the creatures that densely inhabit the shallow waters in Antarctica. Almost 500 animals live there per square metre in some places,’ says Peck. Every year, the females release millions of eggs into the water, from which larvae develop. Analysis of the genetic samples from Antarctica clearly showed a genetic island was present and suggested that genetic islands are likely to occur and disappear relatively frequently among these limpets. ‘We discovered genetic structures in which the animals in the populations are closely related to each other, so that brothers and sisters, and cousins are very dominant in a small area.’

The research data are from 1999 and 2015 and were collected from nine locations in Antarctica. The researchers analysed the genomic data and combined them with data from drift buoys, which provided information about ocean currents. ‘We also developed computer simulations in which we recreated the life cycle of limpets to understand what events might lead to the appearance of a genetic island,’ says David Vendrami. The findings were conclusive: the entire generation of limpets in one place descended from a tiny number of parents. The larvae had also moved in unison with the ocean current and thus settled in the same place.

However, this does not mean that all other theories regarding genetic island formation are wrong. ‘An entirely different theory may apply in other cases,’ says Vendrami. ‘Our research design makes it possible to reconstruct genetic islanding in other cases as well and to narrow down the possible causes.’

‘In order to understand how marine populations evolve, it is essential to comprehend the mechanisms that influence their genetic diversity,’ says David Vendrami. This is important, for example, to be able to better assess the impact of man-made interventions or for managing protected areas and fishing grounds. ‘Our findings provide a basis for better understanding and managing marine populations.’ Anyone managing a protected area, for example, may be concerned if a lot of individual animals in one place are genetically very similar. ‘But it could also just be the formation of a short-term genetic island,’ says the scientist. ‘If this can be verified, it is easier to assess, for example, whether it makes sense to intervene because a population is at risk, or whether it is possibly just a short-term and random event.’ 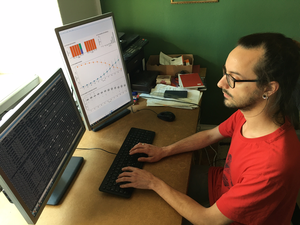 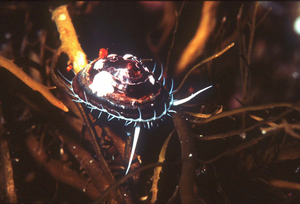