Inspired by a kind of tree leaf, scientists at City University of Hong Kong (CityU) discovered that the spreading direction of different liquids deposited on the same surface can be steered, solving a challenge that has remained for over two centuries. This breakthrough could ignite a new wave of using 3D surface structures for intelligent liquid manipulation with profound implications for various scientific and industrial applications, such as fluidics design and heat transfer enhancement.

Led by Professor Wang Zuankai, Chair Professor in the Department of Mechanical Engineering (MNE) of CityU, the research team found that the unexpected liquid transport behaviour of the Araucaria leaf provides an exciting prototype for liquid directional steering, pushing the frontiers of liquid transport. Their findings were published in the prestigious scientific journal Science under the title "Three-dimensional capillary ratchet-induced liquid directional steering".

Araucaria is a species of tree popular in garden design. Its leaf consists of periodically arranged ratchets tilting towards the leaf tip. Each ratchet has a tip, with both transverse and longitudinal curvature on its upper surface and a relatively flat, smooth bottom surface. When one of the research team members, Dr Feng Shile, visited a theme park in Hong Kong with Araucaria trees, the special surface structure of the leaf caught his attention.

"The conventional understanding is that a liquid deposited on a surface tends to move in directions that reduce surface energy. Its transport direction is determined mainly by the surface structure and has nothing to do with the liquid's properties, such as surface tension," said Professor Wang. But the research team found that liquids with different surface tensions exhibit opposite directions of spreading on the Araucaria leaf, in stark contrast to conventional understanding.

By mimicking its natural structure, the team designed an Araucaria leaf-inspired surface (ALIS), with 3D ratchets of millimetre size that enable liquids to be wicked (i.e. moved by capillary action) both in and out of the surface plane. They replicated the leaf's physical properties with 3D printing of polymers. They found that the structures and size of the ratchets, especially the re-entrant structure at the tip of the ratchets, the tip-to-tip spacing of the ratchets, and the tilting angle of the ratchets, are crucial to liquid directional steering.

"For the first time, we demonstrated directional transport of different liquids on the same surface, successfully addressing a problem in the field of surface and interface science that has existed since 1804," said Professor Wang. "The rational design of the novel capillary ratches enables the liquid to 'decide' its spreading direction based on the interplay between its surface tension and surface structure. It was like a miracle observing the different directional flows of various liquids. This was the first recorded observation in the scientific world."

Even more interesting, their experiments showed that a mixture of water and ethanol can flow in different directions on the ALIS, depending on the concentration of ethanol. A mixture with less than 10% ethanol propagated backwards against the ratchet-tilting direction, while a mixture with more than 40% ethanol propagated towards the ratchet-tilting direction. Mixtures of 10% to 40% ethanol moved bidirectionally at the same time.

"By adjusting the proportion of water and ethanol in the mixture, we can change the mixture's surface tension, allowing us to manipulate the liquid flow direction," said Dr Zhu Pingan, Assistant Professor in the MNE of CityU, a co-author of the paper.

The team also found out that the 3D capillary ratchets can either promote or inhibit liquid transport depending on the tilting direction of the ratchets. When the ALIS with ratchets tilting upwards was inserted into a dish with ethanol, the capillary rise of ethanol was higher and faster than that of a surface with symmetric ratchets (ratchets perpendicular to the surface). When inserting the ALIS with ratchets tilting downwards, the capillary rise was lower.

Their findings provide an effective strategy for the intelligent guidance of liquid transport to the target destination, opening a new avenue for structure-induced liquid transport and emerging applications, such as microfluidics design, heat transfer enhancement and smart liquid sorting.

"Our novel liquid directional steering has many advantages, such as well-controlled, rapid, long-distance transport with self-propulsion. And the ALIS can be easily fabricated without complicated micro/nanostructures," concluded Professor Wang.

The research received funding support from the Research Grants Council and the Innovation and Technology Fund in Hong Kong, the Shenzhen Science and Technology Innovation Council, the Tencent Foundation, the National Natural Science Foundation of China, Fundamental Research Funds for the Central Universities, and the Star Ocean Outstanding Talents Program. 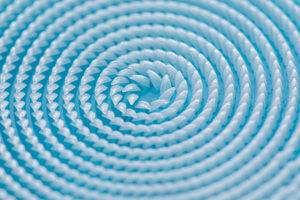 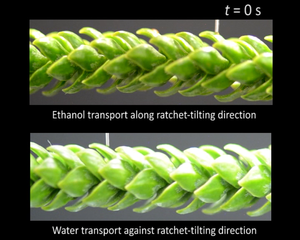 Liquid transport on an Araucaria leaf. 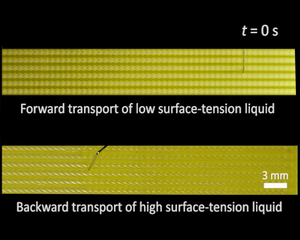 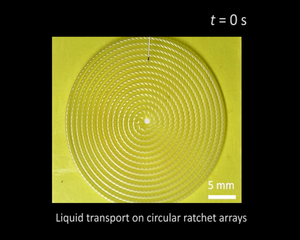 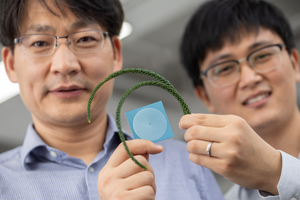 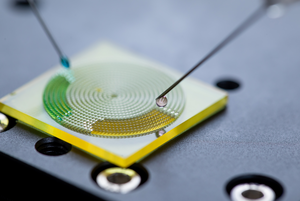