If you’re old enough, you may still have a box of cassette or VHS tapes lying around. These storage devices were popular in the 1970s and 80s, but have since fallen into disuse, replaced by CDs and other digital media.

Now, researchers are taking a new look at chromium oxides, magnetic chemical compounds once used to coat the surfaces of such tapes.

“Chromium oxides are known to have really exciting magnetic and electronic properties,” says Sayres. “They're a very unique material that's poorly understood at the molecular level.” One of the surprising findings of the current study is that adding oxygen atoms to chromium compounds increases their metallic properties and these alterations can be very precisely controlled.

The results open the door to a new breed of electronics that may soon reach the smallest possible scale, permitting the design of tunable, molecular-sized components that could vastly increase processing and storage capacities in new devices.

The findings, which appear in the current issue of the Journal of the American Chemical Society (JACS), describe the behavior of clusters of chromium oxide atoms, which can be fine-tuned to alter their electrical conductance, variously behaving as wire-like conductors of electricity, semiconductors or insulators, depending on the number of oxygen atoms present.

The basic idea found its way into the first consumer products in the late 1990s in the form of magnetic computer hard drives boasting several hundred of times the storage capacity of their predecessors.

Chromium oxides are particularly well suited for such applications due to their high spin polarity, a measure of the range of conductance states the chromium clusters can assume, based on the number of oxygen atoms (or oxidation state).

Known as a half-metal, chromium oxide is an inorganic compound composed of oxygen and chromium atoms, which combine to form a crystal structure. The term half-metal alludes to the fact that its electrical properties can morph between high conductance metallic behavior and low conductance insulating behavior, depending on its electron configuration.

In the current study, a femtosecond laser is used as a camera to observe the motion of excited state electrons, capturing dynamic events that take place on a femtosecond time scale, or a millionth of a billionth of a second. As oxygen atoms were added to the chromium clusters, the subtle transitions between insulating and metallic conducting properties were observed.

“We've tried to take the smallest possible building blocks of chromium oxide and change them atom by atom,” Sayres says. The results show that the bulk properties of chromium oxide still exist down to an extremely small scale. “This means that we can make new devices out of very small amounts of material and still have these exciting electronic properties that chromium oxides are known for.”

In addition to a new generation of familiar electronic devices, chromium oxide-based spintronics may help pave the way for quantum computing. 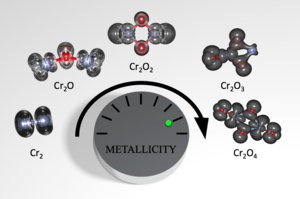