Materials scientists from Nanyang Technological University, Singapore (NTU Singapore) have found a way to prevent internal short-circuits, the main cause of fires in lithium (Li)-ion batteries.

Billions of Li-ion batteries are produced annually for use in mobile phones, laptops, personal mobile devices, and the huge battery packs of electric vehicles and aircraft.

This global battery demand is set to grow, with electric vehicles alone requiring up to 2,700 GWh worth of Li-ion batteries a year by 2030[1], equivalent to some 225 billion mobile phone batteries.

Even with an estimated failure rate[2] of less than one-in-a-million, in 2020 there were 26 power-assisted bicycle fires and 42 cases of personal mobility device fires in Singapore[3].

In most Li-ion battery fires, the cause is due to a build-up of lithium deposits known as dendrites (tiny wire-like tendrils) that cross the separator between the positive (cathode) and negative (anode) electrodes of the battery when it is being charged[4], causing a short-circuit leading to an uncontrolled chemical fire.

To prevent this short-circuit from happening, Professor Xu Zhichuan and his research team from the School of Materials Science and Engineering invented an additional “anti-short layer” on the separator, preventing any dendrite from reaching the cathode.

“We know that for a Li-ion battery to work, Li-ions must be able to travel between the positive and negative sides during charge and discharge cycles,” explains Prof Xu, who is also the Cluster Director of Energy Storage and Renewables & Low Carbon Generation: Solar, at the Energy Research Institute @ NTU (ERI@N). “However, the transfer of the Li-ions also means the formation of dendrites is inevitable for current commercial Li-ion batteries.”

“Instead of preventing the formation of dendrites, we decided to make use of their intrinsic properties by coating an additional layer of conductive material on the separator for these dendrites to connect with. Once the dendrites make the connection it will not be able to continue their growth further, thus preventing them from ever reaching the other side.”

How the “anti-short layer” works

A Li-ion battery could be likened to two bookshelves in a library facing each other (cathode and anode), separated by an aisle (separator). When the battery is charging, Li-ions are transferred from the cathode to the anode, and when discharging, the Li-ions move vice-versa.

NTU’s “anti-short layer” is akin to putting a librarian desk in between both bookshelves in the middle of the aisle – so that when the build-up of used books reaches the librarian’s desk (dendrites), they stop there, while the librarian continues to interact with the other side (See Figure 1).

Prof Xu’s team have tested their technology in the laboratory on over 50 cells with different Li-ion battery compositions and no short-circuits have been detected during the charging phase even when the battery cells are used beyond their lifecycle.

The anti-short layer is a common material used in battery manufacturing and can be easily integrated into the current separator manufacturing process, making it easy for companies to adopt and scale up. The team estimates that the cost increase after adopting this technology would be around 5 per cent more than the existing production cost of a Li-ion battery.

This technology is now patent-pending and is being commercialised by NTUitive, NTU’s innovation and enterprise company. The NTU innovation has also gained the interest of several battery technology firms.

Giving an independent comment on the technology’s potential, Durapower Group’s Chief Executive Officer, Kelvin Lim said: “This technology breakthrough is of significant interest to our business in electrifying e-mobility and stationary energy storage applications that are presently heavily dependent on Li-ion batteries. At the same time, the new invention will help to increase the safety and extend the lifespan of a Li-ion battery, which translates to longer driving ranges for EVs and longer operational hours for battery energy storage solutions.”

Prof Xu’s research on battery technologies is an example of the ambitions of NTU’s 2025 Strategic Plan, of which a core pillar is to conduct interdisciplinary research that can be catalysed and commercialised for real societal impact. The other core pillar addressed is innovation, where the university will seek to accelerate the translation and commercialisation process by assisting the faculty and students through NTUitive.

The work is supported by grants from the National Research Foundation, Prime Minister’s Office, Singapore under its Campus of Research Excellence and Technological Enterprise (CREATE) programme.

The team will be further developing the technology and to test it on commercial standardised Li-ion battery cells, in partnership with interested companies.

Using NTU’s anti-short layer, the growth of the dendrites stops before they reach the electrode. It then acts as an interface on behalf of the negative electrode to exchange lithium-ions with the positive electrode, thus allowing the battery to function as per normal.

Ranked amongst the world’s top universities by QS, NTU has also been named the world’s top young university for the last seven years. The University’s main campus is frequently listed among the Top 15 most beautiful university campuses in the world and it has 57 Green Mark-certified (equivalent to LEED-certified) building projects, of which 95% are certified Green Mark Platinum. Apart from its main campus, NTU also has a campus in Singapore’s healthcare district. 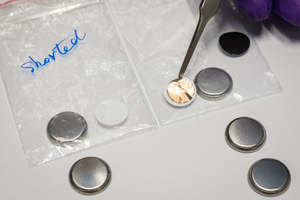