An international research team using the Atacama Large Millimeter/submillimeter Array (ALMA) revealed the distribution of heavy hydrogen, or deuterium, in planet formation sites with the highest resolution ever achieved. This provides clues to understand the physical and chemical conditions during the formation of exoplanets and Solar System objects.

“The various bodies in our Solar System have a variety of chemical compositions,” says Yuri Aikawa, a professor at the University of Tokyo. “This variety could be due to differences in the chemical composition and physical state at their formation sites. Revealing the chemical variation within the planet-forming disks is thus fundamental to the study of planet formation.”

Protoplanetary disks around young stars contain a variety of molecules, each of which emits radio waves of specific wavelengths. In this study, researchers utilized the superb resolution and sensitivity of ALMA to understand the physical and chemical conditions in planet forming disks.

Gianni Cataldi, a postdoc at the University of Tokyo and the National Astronomical Observatory of Japan, and his team focused on deuterium, the heavy brother of hydrogen, in protoplanetary disks. Although there is only one deuterium atom for every 100,000 hydrogen atoms, it is known that the ratio is higher in certain molecules. This deuterium enrichment can be used as a footprint to infer where an object was formed in a disk.

“Two major reactions are thought to be responsible for the deuterium enrichment; one is active in very low-temperature regions and the other remain effective even in the relatively warm regions. Our observations show that both play an important role in disks,” says Cataldi.

Comparing the deuterium abundance ratios observed in protoplanetary disks with those of Solar System objects can provide information on the origin of the objects. For example, the deuterium abundance ratio in HCN molecules was measured for Comet Hale-Bopp, which approached the Sun around 1997 and could be seen brightly from Earth. The value for Comet Hale-Bopp was smaller than the one measured in the protoplanetary disks this time.

“This may suggest that Comet Hale-Bopp formed in the inner part of the disk, close to the young Sun (within 30 au),” says Yoshihide Yamato, a graduate student at the University of Tokyo and a co-author of the research paper. “Another possibility is that the HCN molecules in the comet originated from ices that condensed from the gas cloud at a much earlier stage of the formation of the disk, and were not affected by the deuterium enrichment in the disk.”

These observations are part of an ALMA Large Program, “Molecules with ALMA at Planet-forming Scales,” or MAPS, to detect radio waves emitted by molecules in protoplanetary disks with high spatial resolution. In this program researchers observed protoplanetary disks around five young stars, IM Lupi, GM Aurigae, AS 209, HD 163296, and MWC 480 with ALMA to infer the distribution of about 20 molecules, including deuterated molecules such as DCN and N2D+.

“With ALMA we were able to see how molecules are distributed where exoplanets are currently assembling,” said Karin Öberg, an astronomer at the Center for Astrophysics | Harvard & Smithsonian (CfA) and the Principal Investigator for MAPS. “One of the really exciting things we saw is that the planet-forming disks around these five young stars are factories of a special class of organic molecules, so-called nitriles, which are implicated in the origins of life here on Earth.”

Scientists also observed complex organic molecules like HC3N, CH3CN, and c-C3H2; notably these contain carbon, and therefore are most likely to act as the feedstock of larger, prebiotic molecules. Although these molecules have been detected in protoplanetary disks before, MAPS is the first systematic study across multiple disks at very high spatial resolution and sensitivity, and the first study to find the molecules in such significant quantities at small scales. “We found more of the large organic molecules than expected, a factor of 10 to 100 more, located in the inner disks on scales of the Solar System, and their chemistry appears similar to that of Solar System comets,” said John Ilee, an astronomer at the University of Leeds and the lead author of a MAPS paper. “The presence of these large organic molecules is significant because they are the stepping-stones between simpler carbon-based molecules such as carbon monoxide, which is found in abundance in space, and the more complex molecules that are required to create and sustain life.”

Aikawa and the MAPS team also revealed the spatial distribution of ionized molecules in the disks. They found that ionized molecules are less abundant in the region inside the 100-au radius of disks. If ionized, the gas in the disk is more susceptible to magnetic fields, which can cause gas to start outflowing or, conversely, allow gas to flow into the central star, greatly affecting the growth of stars and planets. The observation also suggests that the ionization rate in the disk midplane might vary from object to object, which indicates that the physical conditions of planet-forming disks are quite complicated.

“I believe that we can approach the mystery of the formation process of our Solar System by combing the observations of protoplanetary disks using ALMA, observations and analysis of Solar System material, and predictions based on theoretical research,” summarizes Aikawa.

Untangling the formation of planetary systems with deuterium 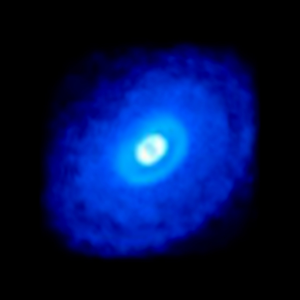