The capacity of coral reefs to provide ecosystem services relied on by millions of people worldwide has declined by half since the 1950s, according to a new University of British Columbia-led study.

The study offers the first comprehensive look at what climate change, overfishing, and habitat destruction of coral reefs mean for their ecosystem services, or the ability of the reef to provide essential benefits and services to humans, including food, livelihoods, and protection from storms. Overall, the findings showed that the significant loss in coral reef coverage has led to an equally significant loss in the ability of the reef to provide these services.

Other findings are equally bleak: the authors found that global coverage of living corals had declined by about half since the 1950s and consequently, the diversity of species had also declined, by more than 60 per cent.

“It's a call to action – we’ve been hearing this time and time again from fisheries and biodiversity research,” said lead author Dr. Tyler Eddy, who conducted the research as a research associate at the UBC Institute for the Oceans and Fisheries (IOF). Now a research scientist at the Fisheries & Marine Institute at Memorial University of Newfoundland, Dr. Eddy said the continuing decline of healthy coral reefs and the quality of habitat they provide is contributing to a global decrease in provision of ecosystem services for the millions of people who rely on them. “We know coral reefs are biodiversity hotspots. And preserving biodiversity not only protects nature, but supports the humans that use these species for cultural, subsistence and livelihood means.”

As well as declines in reef coverage and biodiversity, the researchers found catches of fishes on coral reefs peaked in 2002 and have steadily declined ever since, despite an increase in fishing effort. The catch per unit effort, often used as an indication of changes in biomass, is now 60 per cent lower than it was in 1950.

“This study speaks to the importance of how we manage coral reefs not only at regional scales, but also at the global scale, and the livelihoods of communities that rely on them,” said senior author Dr. William Cheung, professor and director of IOF.

The findings led the researchers to conclude that continued degradation of the reef in years to come now threaten the well-being and sustainable development of human communities on the coast that depend on the coral reef.

The study highlights that Indigenous and coastal communities - in this case in the tropics - are being unfairly hurt by the world's actions, said co-author Dr. Andrés Cisneros-Montemayor, an IOF research associate at the time of the study, and now an assistant professor at Simon Fraser University. “It's heart-wrenching for us to see photos and video of wildfires or floods, and that level of destruction is happening right now all over the world's coral reefs and threatening people's culture, their daily food, and their history. This isn't just an environmental issue, it's also about human rights.”

“Finding targets for recovery and climate adaptation would require a global effort, while also addressing needs at a local level, said Dr. Cheung. “Climate mitigation actions, such as those highlighted in the Paris Agreement, the Intergovernmental Science-Policy Platform on Biodiversity and Ecosystem Services and the Intergovernmental Panel on Climate Change, all call for integrated action to address biodiversity, climate, and social challenges. We are not there yet.”

The study was published today in One Earth.

This work was supported by the Nippon Foundation to the Nereus Program and the Ocean Nexus Center.

Coral reefs are 50% less able to provide food, jobs, and climate protection than in 1950s, putting millions at risk 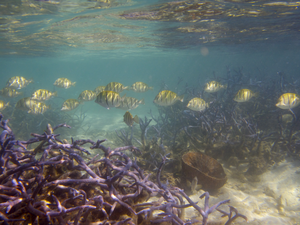 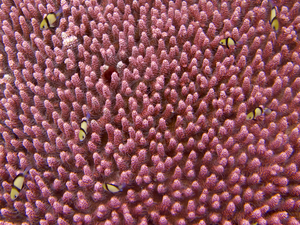