University of Minnesota Medical School graduate students analyzed and summarized literature on the health effects of chemical demonstration control agents, such as tear gas, including the studies which informed existing exposure guidelines. Their study shows that, despite frequent use around the world, there have been few studies that look into the long-term health and environmental effects of tear gas exposure.

“Tear gas and other chemical demonstration control agents (DCAs) have long been used on the civilian population, even though they have been banned in warfare,” said Jennifer Brown, lead author and a neuroscience graduate student at the U of M Medical School. “Most of the published research on these chemicals was done in the 1960s and 1970s and has not been updated, though the DCAs and their methods of deployment have continued to evolve. In our research, we gave special attention to repeated exposure or longitudinal studies, which might provide insight into the poorly understood long-term effects of these chemicals. ”

Published in the journal Inhalation Toxicology, the study team found that:

“Conclusions that CS gas does not disproportionately affect vulnerable groups, such as those with asthma or high blood pressure, are based on studies that largely used exclusively male and very small sample groups that did not follow up any further than one week after exposure,” Brown said. “Moreover, this conclusion ignores the finding that people with hypertension did, in fact, have a greater and prolonged increase in blood pressure compared to non-hypertensive subjects following CS exposure.”

“Additionally, people with asthma experienced more severe chest symptoms immediately after exposure, and there are even reports of death as a result of the combination of asthma and DCA exposure,” Brown added. “Since there is evidence that some symptoms can develop after a delay, failure to monitor past the acute exposure could lead to under-reporting of DCA health effects.”

Brown and colleagues noted that the chemical DCAs used on civilians are poorly studied and poorly regulated, and more rigorous exposure follow-up is needed before they can be declared safe. In the meantime, the research team says increased regulatory scrutiny could decrease the risks to both individuals and the environment.

“We need to continue raising awareness about this issue and working to achieve improved oversight on both the use and manufacturing of these chemical weapons,” Brown said.

More recent studies and case reports describe significant negative health effects that were either overlooked or not included in the design of earlier experiments. Some of these impacts included menstrual cycle disruption in women, negative effects on mental health and lingering respiratory problems. Additionally, more inclusive research is needed to parse the effects on different body systems and different demographic groups, including women, pregnant women, children and people with pre-existing conditions.

About the University of Minnesota Medical School
The University of Minnesota Medical School is at the forefront of learning and discovery, transforming medical care and educating the next generation of physicians. Our graduates and faculty produce high-impact biomedical research and advance the practice of medicine. We acknowledge that the U of M Medical School, both the Twin Cities campus and Duluth campus, is located on traditional, ancestral and contemporary lands of the Dakota and the Ojibwe, and scores of other Indigenous people, and we affirm our commitment to tribal communities and their sovereignty as we seek to improve and strengthen our relations with tribal nations. For more information about the U of M Medical School, please visit med.umn.edu. 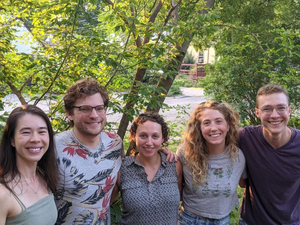