On 28 February 2020, at 10:30 CET, hundreds of people across Slovenia, Croatia, Italy, Austria and Hungary observed a bright ball of light hurtling across the morning sky. This delivery of rocks from a distant asteroid to the fields and villages of southern Slovenia was captured by cars’ dashcams, security cameras, and even a cyclist’s helmet. It is one of only around 40 fallen space rocks that has been recovered within weeks and for which the origins in the Solar System have been tracked. Initial results are being presented by Dr Denis Vida, of the University of Western Ontario, at the Europlanet Science Congress (EPSC) 2021 virtual meeting.

Observers in southern Slovenia, who were directly under the path, reported loud explosions and a three and half second flash that left a trail of dust visible for several minutes. Analysis shows that some fragments survived aerodynamic pressures above ten million pascals, equivalent to 50 times the pressure of a car tyre, one of the highest measurements recorded for a space rock-dropping fireball.

Before entering the Earth’s atmosphere, the initial stony mass is thought to have been four metric tons and roughly one metre across. Video footage shows the fireball breaking up into 17 smaller pieces. Three fragments amounting to 720 grams have been recovered and taken to laboratories for analysis. The largest fragment seen to fall, with an estimated mass of about ten kilograms, is yet to be found. It likely dropped into a muddy field and may have accidentally been ploughed in before its fall area was known.

Rocks from space provide opportunities to understand the history of our Solar System and are important in studies of how life arose on Earth. However, fall locations often remain unknown or hidden and the space rocks’ scientific messages are then lost. To address this, astronomers deploy networks of fireball cameras to measure the precise paths of fireballs by comparing their positions to stars in the background. This means they can ascertain both the locations where space rocks can be collected, and can trace backward to where in the Solar System they came from. However, these networks are designed to work at night.

“By combining observations from several cameras around 100 kilometres apart, a fireball’s position can be pinpointed to within 50 metres, and it’s usually fairly easy to compute its atmospheric trajectory and pre-atmospheric orbit this way,” said Vida. “The fireball’s path is in a volume of the world’s sky among the most densely observed by specialist night-operating cameras. Its path would have been caught by at least 20 if it happened just a few hours earlier. But because this fireball occurred during the day and was recorded by dash cameras moving up to 70 kilometres per hour, we required a different approach.”

To help create 3D models, local people were asked to take several photographs from known locations of buildings, telephone posts, distant mountains, and other landmarks visible in the dashcam videos. The images enabled triangulation of exact locations accurate to within a few centimetres, akin to surveyors with a theodolite. Photographs were taken on starry nights, so after calibrating against window frames and the other known points, every pixel on the original images could be mapped to a precise direction. Hardest was determining the exact coordinates from the dashcam footage of moving vehicles – for every video frame and to a precision of about one centimetre, which was long tedious work.

Analysis of the Novo Mesto space rock, named after the Slovenian city near where the fragments were found, is ongoing. Although of an ‘ordinary chondrite’ type meteorite, it is interesting in being linked to the Solar System region where Near Earth Objects exist, possibly telling us something of larger former neighbours, a small number of which are potentially hazardous to Earth. 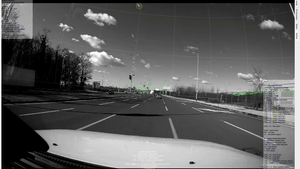 Dashcam image of the fireball observed from Sesvete in Croatia, calibrated using the height of lampposts.

A 48-gram piece of the Novo Mesto meteorite. 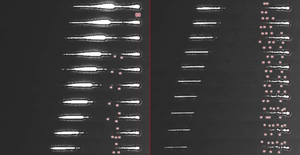 The fireball fragmenting, observed from Sesvete in Croatia.