The trillions of bacteria living in our guts play a crucial role in our ability to digest food and fight off disease. All other animals also have communities of bacteria living inside them, that scientists call microbiomes, and learning about them can help scientists put together a more complete picture of how those animals interact with the world. In a new study in the journal Molecular Ecology, researchers used tiny radio trackers to follow the movements of birds that migrated between The Bahamas and Michigan, and they found that the same individual birds’ gut bacteria were different in the two locations. And to figure that out, the scientists had to get up close and personal with a lot of bird poop.

“We’ve seen in other animals that microbiomes can be influenced by the places their hosts live. Lots of birds migrate, and they experience different environments at different points of their migratory cycle. We didn’t know how these different environments affected the birds’ microbiomes,” says Heather Skeen, a PhD student at the Field Museum and the University of Chicago and the lead author of the Molecular Ecology study with the Field Museum’s John Bates and Shannon Hackett, Nathan Cooper at the Smithsonian Conservation Biology Institute, and Peter Marra at Georgetown University.

“This study shows how much we can learn about even foundational aspects of bird biology, such as migration, from the combination of new and old technologies--fieldwork and following birds in their breeding, migrating, and wintering habitats, to newer technologies of radiotelemetry and next-generation DNA sequencing,” says Hackett, an associate curator at the Field Museum.

While thousands of bird species migrate, Skeen and her colleagues honed in on just one for this study: Kirtland’s Warbler, one of the rarest birds in the world. Kirtland’s Warblers are tiny yellow-breasted songbirds that spend their winters in The Bahamas and migrate to northern Michigan in the spring, where they breed only in young jack pine forest. They nearly went extinct in the 20th century, falling to just 167 males left in the wild in 1987, but their populations have stabilized thanks to intense conservation efforts on the breeding grounds.

Still, they’re a rarity in the bird world, and that rarity, paired with their extreme pickiness in breeding grounds, made them ideal subjects for this study. “We picked Kirtland’s Warbler because there are very, very few species of birds where you would have been able to track individual birds from their non-breeding grounds and then capture them on their breeding grounds,” says Skeen. Trying to follow individuals of extremely common, widely distributed birds like robins would have been like trying to find a needle in a haystack; with Kirtland’s Warblers, there’s a much smaller haystack to choose from, spread over a much smaller geographic area.

The researchers started by doing fieldwork in The Bahamas, where they lured Kirtland’s Warblers with recorded bird calls and fitted them with tiny radio tracking devices. The birds themselves are tiny, about half an ounce, so the geolocators weighed less than half a gram. (For context, a penny weighs about 2.5 grams.) After attaching the trackers, Skeen and her colleagues then put the birds inside of wax paper bags for a few minutes. The birds promptly turned the bags into their own private bathrooms. The warblers were then released, leaving Skeen to go into the bags and collect fecal samples.

A few months later, when the birds migrated from The Bahamas to Michigan, Skeen and her colleagues used a large network of automated radio towers, known as the Motus Wildlife Tracking System, to locate the exact same individual birds that they’d sampled in The Bahamas. “There were 12 radio towers spread throughout the birds’ breeding range in Michigan, and when one of our birds’ trackers pinged near a tower, we would drive around the range using a handheld radio antenna, looking for the bird,” says Skeen. “Once we picked up the signal, we got out of the car and walked around, trying to attract the birds using recordings of their songs.” When the birds flew into the nets that the researchers set up, the scientists repeated the paper bag procedure before letting the birds go again.

Armed with nearly two hundred samples of bird poop and samples from the same individual birds in both The Bahamas and Michigan, the researchers conducted genetic analyses of the bacteria present in the poop. They found that the bacteria present in the Michigan poop was different from the bacteria in The Bahamas poop. But, more importantly, the same individual birds had different bacteria in their digestive tracts depending on where they were when the poop was collected.

“One of the most important parts about this study is that we were able to recapture birds at different portions of the annual cycle in different locations, and we have this one-to-one comparison of the same population and the same individuals and how their microbiomes changed,” says Skeen. “If we’d tested different individual birds, we wouldn’t have been able to say for sure if the changes we saw were due to location or if they were just differences between populations. Since we were looking at the exact same birds, these results are much more supported.”

The study’s findings that bird microbiomes vary from one location to another, even within the same individuals, can help scientists puzzle out how bird microbiomes work. “We know that birds’ microbiomes are different from most mammals’, but we don’t know exactly how or why,” says Skeen. In most mammals, the kinds of gut bacteria present are closely tied to the animal’s species and evolutionary history, but with birds, those connections appear to be looser. Instead, previous studies have indicated that birds’ gut microbiomes have more to do with where they live than what species they are. “In our study, we found that there are some groups of bacteria that are probably transient-- the birds acquire the bacteria from their food, they poop it out, and it’s gone,” says Skeen. “These bacteria don’t colonize the bird, they go in and out.” 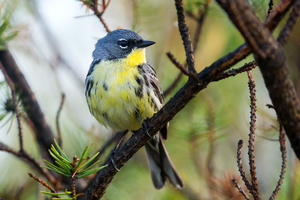 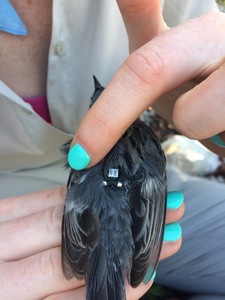 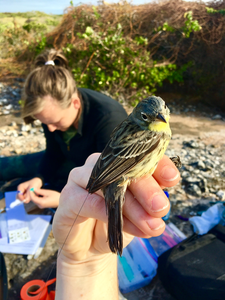