Quantum communication has presented a revolutionary step in secure communication due to its high security of the quantum information, and many communication protocols have been proposed, such as the quantum secure direct communication (QSDC) protocol. QSDC based on entanglement can directly transmit confidential information. Any attack of QSDC results to only random number, and cannot obtain any useful information from it. Therefore, QSDC has simple communication steps and reduces potential security loopholes, and offers high security guarantees, which guarantees the security and the value propositions of quantum communications in general. However, the inability to simultaneously distinguish the four sets of encoded orthogonal entangled states in entanglement-based QSDC protocols limits its practical application. Furthermore, it is important to construct quantum network in order to make wide applications of quantum secure direct communication. Experimental demonstration of QSDC is badly required.

In a new paper published in Light Science & Application, a team of scientists, led by Professor Xianfeng Chen from State Key Laboratory of Advanced Optical Communication Systems and Networks, School of Physics and Astronomy, Shanghai Jiao Tong University, China and Professor Yuanhua Li from Department of Physics, Jiangxi Normal University, China have explored a QSDC network based on time-energy entanglement and sum-frequency generation (SFG). They present a fully connected entanglement-based QSDC network including five subnets, with 15 users. Using the frequency correlations of the fifteen photon pairs via time division multiplexing and dense wavelength division multiplexing (DWDM), they perform a 40-kilometer fiber QSDC experiment by implying two-step transmission between each user. In this process, the network processor divides the spectrum of the single-photon source into 30 International Telecommunication Union (ITU) channels. With these channels, there will be a coincidence event between each user by performing a Bell-state measurement based on the SFG. This allows the four sets of encoded entangled states to be identified simultaneously without post-selection.

These scientists summarize the experiment results of their network scheme:

“The results show that when any two users are performing QSDC over 40 kilometers of optical fiber, the fidelity of the entangled state shared by them is still greater than 95%, and the rate of information transmission can be maintained at 1 Kbp/s. Our result demonstrates the feasibility of a proposed QSDC network, and hence lays the foundation for the realization of satellite-based long-distance and global QSDC in the future.”

“With this scheme, each user interconnects with any others through shared pairs of entangled photons in different wavelength. Moreover, it is possible to improve the information transmission rate greater than 100 Kbp/s in the case of the high-performance detectors, as well as high-speed control in modulator being used” they added.

“It is worth noting the present-work, which offers long-distance point-to-point QSDC connection, combined with the recently proposed secure-repeater quantum network of QSDC, which offers secure end-to-end communication throughout the quantum Internet, will enable the construction of secure quantum network using present-day technology, realizing the great potential of QSDC in future communication.” the scientists forecast. 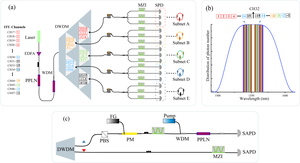