Due to the trend of miniaturization of devices, micromanipulation has been a hot topic in the last two decades. Unlike the macro world, the micro object can easily be damaged if the contact force is not accurately detected and controlled. For instance, in medical cardiac catheterization, if physicians don’t know the exact contact force between the catheters and blood vessel walls during an interventional procedure, the delicate blood vessel networks could be damaged which can cause severe consequences. However, it remains challenging to scale down the size of the nanomechanical sensor and increase force resolution because of mechanical feedback mechanisms and active components. Developing a compact all-fiber micro-force sensor can open up countless capabilities, including real-time intracellular monitoring, minimally invasive probing, and high-resolution detection.

In a new paper published in Light Science & Applications, Professor Yiping Wang from Shenzhen University and his research team have proposed the microprinting of a novel fiber-tip-polymer clamped-beam probe micro-force sensor for the examination of biological samples. The proposed sensor consists of two bases, a clamped beam, and a force-sensing probe, which were developed using a femtosecond-laser-induced two-photon polymerization technique. A miniature all-fiber micro-force sensor of this type exhibited an ultrahigh force sensitivity of 1.51 nm/μN, a detection limit of 54.9 nN, and an unambiguous sensor measurement range of 2.9 mN. The Young's modulus of polydimethylsiloxane, a butterfly feeler, and human hair were successfully measured with the proposed sensor. This approach opens new avenues towards the realization of small-footprint AFMs that could be easily adapted for use in outside specialized laboratories. This device will be beneficial for high-precision biomedical and material science examination, and the proposed fabrication method provides a new route for the next generation of research on complex fiber-integrated polymer devices.

Using the structure-correlated mechanics, the team developed a compact all-fiber micro-force sensor for the examination of biological samples. In this sensor, the clamped beam, the support bases, and the force-sensing probe were printed on the optical fiber end surface using TPP 3D microprintnig method. The structure of the sensor was optimized using the finite element method (FEM), and its static characteristic was analyzed. The lead-in fiber-end surface and the clamped beam define a Fabry–Perot interferometer (FPI). When an external force is exerted on the probe, the probe deflects the clamped beam, which modulates the length of the FPI. This method utilizes the low stiffness and high resilience of the structure of the clamped beam, enables it to deform enough when a small force is applied, and thus greatly improves both force resolution and detection range of the sensor.

The team then carried out microforce sensing measurements before any sensing applications. When the force is gradually applied to clamped-beam probe, the reflection spectrum of the micro-force sensor was monitored in real time. Results showed a blue shift in the dip wavelength, and the force sensitivity of the sensor was calculated to be -1.51 nm/μN by using a linear fit of the dip wavelength change, which are two orders of magnitude higher than that of the previously reported fiber-optic force sensor based on a balloon-like interferometer. Thus, the relationship between the applied force and the output of the sensor was quantified. In addition, the micro-force sensor has a detection limit of 54.9 nN, and an unambiguous sensor measurement range of 2.9 mN.

At the last stage, after the system was fully calibrated, the proposed sensor successfully measured PDMS, a butterfly feeler and human hair. Results were verified using an AFM. To the best of our knowledge, this fiber sensor has the smallest force-detection limit in direct contact mode reported to date. With its high force sensitivity, ultra-small detection limit, micrometer-scale measurement, easy packaging, all-dielectric design, biocompatibility, and all-fiber operation, the proposed sensor has great application prospects for examining biological samples and the mechanical properties of materials. 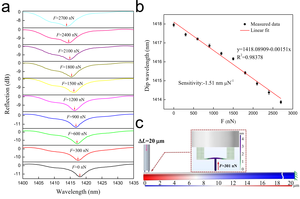 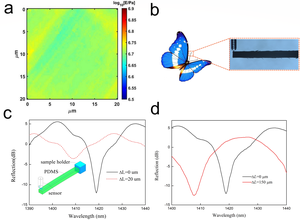