On 16 December 2020 the Chang'e-5 mission, China's first sample return mission to the Moon, successfully delivered to Earth nearly two kilograms of rocky fragments and dust from our celestial companion. Chang’e-5 landed on an area of the Moon not sampled by the NASA Apollo or the Soviet Luna missions nearly 50 years ago, and retrieved fragments of the youngest lunar rocks ever brought back for analysis in laboratories on Earth. Early-stage findings, which use geological mapping to link ‘exotic’ fragments in the collected samples to features near the landing site, have been presented by Mr Yuqi Qian, a PhD student at the China University of Geosciences, at the Europlanet Science Congress (EPSC) 2021 virtual meeting.

The Chang'e-5 landing site is located on the western edge of the nearside of the Moon in the Northern Oceanus Procellarum. This is one of the youngest geological areas of the Moon with an age of roughly two billion years. The materials scraped from the surface comprise a loose soil that results from the fragmentation and powdering of lunar rocks over billions of years due to impacts of various sizes.

The study presented by Qian suggests that ninety percent of the materials collected by Chang’e-5 likely derive from the landing site and its immediate surroundings, which are of a type termed ‘mare basalts’. These volcanic rocks are visible to us as the darker grey areas that spilled over much of the nearside of the Moon as ancient eruptions of lava. Yet ten percent of the fragments have distinctly different, ‘exotic’ chemical compositions, and may preserve records of other parts of the lunar surface as well as hints of the types of space rocks that have impacted the Moon’s surface.

Qian and colleagues from Brown University and the University of Münster have looked at the potential sources of beads of rapidly cooled glassy material. They have traced these glassy droplets to now extinct volcanic vents known as ‘Rima Mairan’ and ‘Rima Sharp’ located roughly 230 and 160 kilometres southeast and northeast of the Chang’e-5 landing site. These fragments could give insights into past episodes of energetic, fountain-like volcanic activity on the Moon.

The team has also looked at the potential sources of impact-related fragments. The young geological age of the rocks at the landing site narrows the search, as only craters with ages less than 2 billion years can be responsible, and these are relatively rare on the side of the Moon that faces Earth.  The team has modelled the potential contributions from specific craters to the south and southeast (Aristarchus, Kepler, and Copernicus), northwest (Harding), and northeast (Harpalus). Qian’s findings show that Harpalus is a significant contributor of many exotic fragments among Chang’e-5’s sample haul, and these pieces of rock could offer a way to address persisting uncertainty about this crater’s age. Some fragments may have been thrown into Chang’e-5 landing area from nearly 1,300 kilometres away.

Modelling and review of work by other teams has linked other exotic pieces of rock to domes rich in silica or to highland terranes, mountains of pale rock that surround the landing site.

“All of the local and exotic materials among the returned samples of Chang’e-5 can be used to answer a number of further scientific questions,” said Qian. “In addressing these we shall deepen our understanding of the Moon’s history and help prepare for further lunar exploration.” 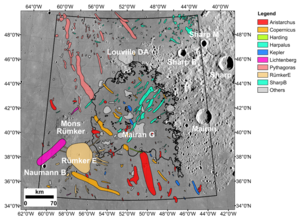 Location of the Chang’e-5 landing site, showing nearby impact craters that were examined as possible sources of exotic fragments among the recently returned lunar materials