On Earth, river erosion is usually a slow-going process. But on Mars, massive floods from overflowing crater lakes had an outsized role in shaping the Martian surface, carving deep chasms and moving vast amounts of sediment, according to a new study led by researchers at The University of Texas at Austin.

“If we think about how sediment was being moved across the landscape on ancient Mars, lake breach floods were a really important process globally,” said lead author Tim Goudge, an assistant professor at the UT Jackson School of Geosciences. “And this is a bit of a surprising result because they’ve been thought of as one-off anomalies for so long.”

Crater lakes were common on Mars billions of years ago when the Red Planet had liquid water on its surface. Some craters could hold a small sea’s worth of water. But when the water became too much to hold, it would breach the edge of the crater, causing catastrophic flooding that carved river valleys in its wake. A 2019 study led by Goudge determined that these events happened rapidly.

Remote sensing images taken by satellites orbiting Mars have allowed scientists to study the remains of breached Martian crater lakes. However, the crater lakes and their river valleys have mostly been studied on an individual basis, Goudge said. This is the first study to investigate how the 262 breached lakes across the Red Planet shaped the Martian surface as a whole.

The research entailed reviewing a preexisting catalog of river valleys on Mars and classifying the valleys into two categories: valleys that got their start at a crater’s edge, which indicates they formed during a lake breach flood, and valleys that formed elsewhere on the landscape, which suggests a more gradual formation over time.

From there, the scientists compared the depth, length and volume of the different valley types and found that river valleys formed by crater lake breaches punch far above their weight, eroding away nearly a quarter of the Red Planet’s river valley volume despite making up only 3% of total valley length.

“This discrepancy is accounted for by the fact that outlet canyons are significantly deeper than other valleys,” said study co-author Alexander Morgan, a research scientist at the Planetary Science Institute.

In addition, although the chasms appeared in a geologic instant, they may have had a lasting effect on the surrounding landscape. The study suggests that the breaches scoured canyons so deep they may have influenced the formation of other nearby river valleys. The authors said this is a potential alternative explanation for unique Martian river valley topography that is usually attributed to climate.

The study demonstrates that lake breach river valleys played an important role in shaping the Martian surface, but Goudge said it’s also a lesson in expectations. The Earth’s geology has wiped away most craters and makes river erosion a slow and steady process in most cases. But that doesn’t mean it will work that way on other worlds.

“When you fill [the craters] with water, it’s a lot of stored energy there to be released,” Goudge said. “It makes sense that Mars might tip, in this case, toward being shaped by catastrophism more than the Earth.”

The importance of lake breachfloods for valley incisionon early Mars 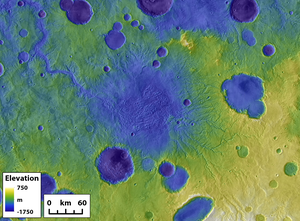