Mercury is released by coal combustion and mining activities to the atmosphere as a gaseous pollutant. Following global dispersal, mercury deposits partly to the ocean where it accumulates within the marine food chain—with grave consequences for human health and nutrition. A new study published in Nature on 29 September 2021 reveals that, contrary to earlier hypotheses, rainwater is not the primary deposition vector of this mercury; rather, the ocean breathes mercury, so to speak.1 This research also suggests that the ocean receives less atmospheric mercury than previously estimated, though we cannot yet assume a lower degree of contamination in fish. The Minamata Convention on Mercury,2 which went into effect in 2017, has prompted the adoption of mercury emission reduction policies that should directly impact mercury levels in the ocean and in our plates. This study was conducted by an international team including scientists from Géosciences Environnement Toulouse (CNRS / Université Toulouse III–Paul Sabatier / CNES / IRD), the Mediterranean Institute of Oceanography (CNRS / Aix-Marseille University / IRD / University of Toulon) and the Environmental Geosciences laboratory of the University of Basel (Switzerland).

1 That is, the mercury is absorbed by the surface waters of the ocean through gas exchange.

2 The international Minamata Convention on Mercury was drafted under the aegis of the United Nations Environment Programme. It aims to protect human health and the environment from the harmful effects of mercury.

On the trail of ocean mercury 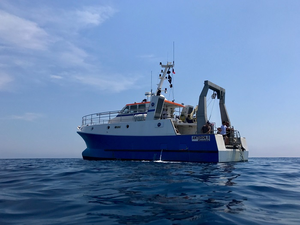