In a new study conducted at Tel Aviv University, researchers have succeeded in characterizing the incredible preying capability of seahorses, discovering that they can move their head up at the incredible speed of 0.002 seconds. The rapid head movement is accompanied by a powerful flow of water that snags their prey right into the seahorse's mouth.

The study was led by Prof. Roi Holzman and the doctoral student Corrine Jacobs of the School of Zoology at the George S. Wise Faculty of Life Sciences and the Steinhardt Museum of Natural History at Tel Aviv University, and was conducted at the Interuniversity Institute for Marine Sciences in Eilat. The study was published in the Journal of Experimental Biology.

The researchers explain that seahorses are fish that possess unique properties such as male 'pregnancy', square tail vertebrae, and of course the unique eating system. For most of the day, seahorses are anchored with their tail to seaweeds or corals with their head tilted downward, close to their body. However, when they detect prey passing over them, they lift their head at incredible speed and catch it. According to Prof. Holzman, while preying, seahorses turn their body into a kind of spring: using their back muscles, they stretch an elastic tendon, and use their neck bones as a 'trigger', just like a crossbow. The result is faster than even the fastest muscle contraction found anywhere in the animal world.

However, until now it was not clear how the spring-loaded mechanism enabled seahorses to actually eat. Just as anyone who tries to remove a fly from a cup of tea knows, water is a viscous medium and the fish needs to open its mouth to create a flow that draws the prey in. But how do seahorses coordinate snagging in prey with their head movement?

In their recent study, researchers from Tel Aviv University succeeded in characterizing and quantifying seahorse movement by photographing their attack at a speed of 4,000 images per second, and using a laser system for imaging water flows. This measurement showed that the 'crossbow' system serves two purposes: facilitating head movement and generating high velocity suction currents - 10 times faster than those of similar-sized fish. These advantages enable seahorses to catch particularly elusive prey.

The new measurements also help shed light on the ecology of various species of seahorses, distinguished from each other by the length of their noses. "Our study shows that the speed of head movement and suction currents are determined by the length of a seahorse's nose", Prof. Holzman added. "From the evolutionary aspect, seahorses must choose between a short nose for strong suction and moderate head raising, or a long nose for rapid head raising and weaker suction currents. This choice, of course, corresponds to the available diet: long-nosed species catch smaller, quicker animals whereas short-nosed species catch heavier, more ponderous ones."

According to Prof. Holzman, seahorses are not the only instance of the impressive spring mechanism. Actually, seahorses are counted among the family of fish bearing the appropriate scientific name Misfit Fish, including species such as alligator pipefish, shrimpfish, and cornetfish or flutemouths.

"These fish are called that because of their odd shape which enables stretching their body into a spring. The big question applies to the evolution of the spring mechanism, how it was formed and when it developed. I hope our recent study will lead to further studies designed to help solve the riddle of spring fish". 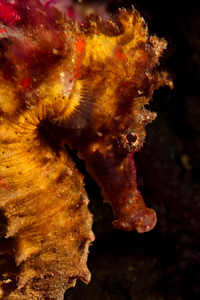 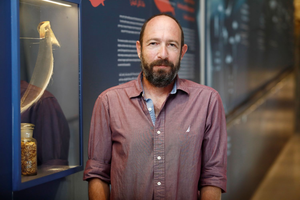