WEST LAFAYETTE, Ind. — What makes pancreatic cancer so deadly is its covert and quick spread. Now, a “time machine” built by Purdue University engineers has shown a way to reverse the course of cancer before it spreads throughout the pancreas.

“These findings open up the possibility of designing a new gene therapy or drug because now we can convert cancerous cells back into their normal state,” said Bumsoo Han, a Purdue professor of mechanical engineering and program leader of the Purdue Center for Cancer Research. Han has a courtesy appointment in biomedical engineering.

The time machine that Han’s lab built is a lifelike reproduction of a pancreatic structure called the acinus, which produces and secretes digestive enzymes into the small intestine. Pancreatic cancer tends to develop from chronic inflammation that happens when a mutation has caused these digestive enzymes to digest the pancreas itself.

If there were a way to go back in time to reprogram the cancerous acinar cells that produce those enzymes, then it might be possible to completely reset the pancreas.

For the past decade, Stephen Konieczny, professor emeritus in Purdue’s Department of Biological Sciences, has studied a potential reset button: a gene called PTF1a.

“The PTF1a gene is absolutely critical for normal pancreas development. If you lack the PTF1a gene, you don’t develop a pancreas,” Konieczny said. “So, our whole idea was, if we turn the PTF1a gene back on in a pancreatic cancer cell, what happens? Will we revert the cancer phenotype? Indeed, that’s exactly what happens.”

Konieczny collaborated with Han’s lab to take these findings in molecular biology studies to the next level by testing them in a realistic model of the acinus – the time machine. The published study is featured on the cover of the Oct. 7 issue of Lab on a Chip, a journal by the Royal Society of Chemistry.

Researchers typically investigate possible pancreatic cancer treatment approaches in animal models, but it can take months for pancreatic cancer to develop in an animal. Having a way to study cancer development and treatment concepts in a microenvironment that is just as realistic would save time and give researchers more control over the model.

The model that Purdue researchers developed overcomes a major challenge in accurately capturing the anatomical complexity of the acinus, a circular cavity lined with cells.

“From an engineering perspective, creating this kind of three-dimensional cavity is not trivial. So, figuring out a way to build this cavity is an innovation in itself,” Han said.

Here’s how it works: The model, a postage stamp-size glass platform on top of a microscope slide, has two interconnected chambers. Loading a collagen solution into one chamber fills the finger-like shape of a pancreatic duct, which bulges and then expands to create the cavity structure of the acinus in the second chamber.

Dropping cancerous human cells into the acinar chamber made the model even more realistic. Konieczny’s lab engineered the PTF1a gene of a pancreatic cancer cell line to turn on in the presence of doxycycline, a compound commonly used in antibiotics. Once the gene was activated, the cells started constructing the rest of the acinus in Han’s model, indicating that they were no longer cancerous and had been reprogrammed.

“In this model, not only do the cancerous cells become reprogrammed, but for the first time, we’re able to show the normal three-dimensional architecture of the acinus, which looks very similar to the same structures we see in a healthy pancreas,” Konieczny said.

Han’s lab is currently conducting experiments exploring a possible gene therapy based on these findings.

This study was partially supported by grants from the National Institutes of Health, the Walther Embedding Program in Physical Sciences in Oncology, and the Purdue Center for Cancer Research, which is one of only seven National Cancer Institute Basic Laboratory Cancer Centers in the nation.

A pancreatic acinus is a functional unit of the exocrine pancreas producing digest enzymes. Its pathobiology is crucial to pancreatic diseases including pancreatitis and pancreatic cancer, which can initiate from pancreatic acini. However, research on pancreatic acini has been significantly hampered due to the difficulty of culturing normal acinar cells in vitro. In this study, an in vitro model of the normal acinus, named pancreatic acinus-on-chip (PAC), is developed using reprogrammed pancreatic cancer cells. The developed model is a microfluidic platform with an epithelial duct and acinar sac geometry microfabricated by a newly developed two-step controlled “viscous-fingering” technique. In this model, human pancreatic cancer cells, Panc-1, reprogrammed to revert to the normal state upon induction of PTF1a gene expression, are cultured. Bioinformatic analyses suggest that, upon induced PTF1a expression, Panc-1 cells transition into a more normal and differentiated acinar phenotype. The microanatomy and exocrine functions of the model are characterized to confirm the normal acinus phenotypes. The developed model provides a new and reliable testbed to study the initiation and progression of pancreatic cancers. 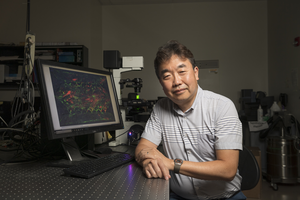 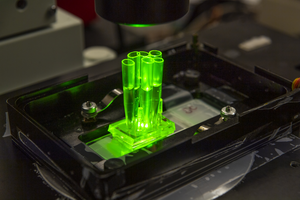