A team led by the Department of Energy’s Oak Ridge National Laboratory and the University of Michigan has discovered that certain bacteria can steal an essential compound from other microbes to break down methane and toxic methylmercury in the environment.

The findings could inform strategies that aim to manipulate these microorganisms to reduce emissions of methane, a powerful greenhouse gas, and detoxify methylmercury, a potent neurotoxin that can accumulate in the food supply.

The study, published in The ISME Journal, found that certain classes of methanotrophs or  methane-consuming bacteria that were previously thought unable to degrade methylmercury can actually break it down in the environment. This activity is possible because the microbes are equipped with the cellular machinery to absorb and use a compound called methanobactin that is produced by other microbes.

Methanotrophs are widespread in nature. They live near methane and air interfaces, such as the topmost layer of soils, river sediments and wetlands where they can access oxygen while feeding on the methane that flows up from the anoxic, or oxygen-deficient, environments below.

These bacteria play a critical role in the carbon cycle, consuming substantial amounts of methane generated by other microbes called methanogens. This natural counterbalance is important in limiting methane emissions, which are 25 times more potent than carbon dioxide at warming Earth’s atmosphere.

Understanding more about the way the methane-feeders function may point to methods to use them like levers to control methane emissions. The new knowledge can also better inform climate models that predict the planet’s future.

Researchers discovered these new methanotroph behaviors while studying another global problem: mercury pollution. ORNL has a long history of breakthroughs related to mercury, including their 2013 discovery of the genes that enable microbes to transform mercury into the toxin methylmercury.

In 2017, an ORNL-led team was the first to demonstrate that some methanotrophs can break down methylmercury, a process called demethylation. Their newest findings build on that discovery, showing that more methanotrophs than previously known can degrade methylmercury.

“As we gain new insights about methanotrophic activities, we may be able to more effectively manipulate these microbial communities to reduce methane emissions and enhance mercury detoxification in the environment,” said Baohua Gu, an ORNL corporate fellow and biogeochemist.

Methanotrophs are looking for the easiest, quickest food supply, with a target of single-carbon compounds like methane and methylmercury, which have similar chemical structures. These microbes also require copper to fuel their metabolic processes. It is this need for copper that can limit methanotrophic activity, driving the microbes to seek copper sources in the environment using many different methods.

Some methanotrophs use a surface protein to secure copper. Others secrete a compound called methanobactin, or MB, that binds with copper in the environment and facilitates copper acquisition. Previous findings by the team had shown that only bacteria with the genetic and metabolic machinery to produce MB can break down methylmercury.

The researchers’ latest findings demonstrate that some methanotrophs that do not make MB can detoxify methylmercury by using MB secreted by other methanotrophs. In other words, they steal it.

“They are effectively what we call cheaters,” said University of Michigan microbiologist Jeremy Semrau. “This has been observed before, where one microorganism produces something that is of benefit to the general community and others steal it. This enables some methanotrophs to meet their copper requirements.”

The research team also showed that successful theft of MB requires that methanotrophs have the gene, named mbnT, that enables production of a specific protein called the TonB transporter. Aptly named, this protein moves MB — and the associated copper — into the microbe, enabling the breakdown of methylmercury and methane.

Scientists at U-M engineered a strain of methanotrophs without the mbnT gene, and the team at ORNL analyzed the mercury in the samples. The removal of the mbnT gene and transporter protein in these microbes effectively disabled their ability to take up MB or detoxify methylmercury.

These insights could inform future paths toward addressing mercury pollution in the environment.

“I think it’s a wonderful strategy going forward where we might be able to utilize methanotrophs to help remediate mercury contaminated sites, and that this might actually be going on, to some extent, naturally,” Semrau said.

Another piece of the puzzle

Methanotrophs are common in the environment, but there is still a lot to learn about their activities. A team led by ORNL environmental scientist Scott Brooks collaborated with Semrau’s group at U-M on the discovery of several novel methanotrophs in East Fork Poplar Creek, a mercury-contaminated stream flowing through the Oak Ridge Reservation that has been studied for decades.

Brooks and his team have been studying biofilms, which are complex communities of algae and bacteria that accumulate on creek rocks as “green slime.” Though biofilms are only about as thick as a few stacked credit cards, they are hot spots for mercury and nutrient processing.

The ORNL team had previously found that oxygen-deficient pockets within these biofilms house microbes that are transforming mercury into its most toxic form: methylmercury. Their recent discovery of methanotrophs in the oxygen-rich recesses of these same biofilms means that methylmercury breakdown is also occurring naturally in the creek.

“There are some really steep chemical gradients and changes in concentration taking place over a very small distance,” Brooks said. That includes dissolved oxygen that “disappears within a few tenths of a millimeter.”

Those tiny pockets of oxygen are enough for methanotrophs to thrive. Preliminary analysis showed that microbial activity producing methylmercury outpaced the methanotrophic activity breaking down the toxin. With further study, scientists could potentially identify methods of tipping the balance toward methylmercury degradation.

“This is a nice marriage of two different research projects working in parallel,” Brooks said. “We’re seeing things that are consistent with one another and that helps us confirm what is happening with mercury cycling in these complex microbial communities.”

This research was funded by DOE’s Office of Science, Office of Biological and Environmental Research, as part of the Biogeochemical Transformations at Critical Interfaces Scientific Focus Area.

UT-Battelle manages ORNL for Department of Energy’s Office of Science, the single largest supporter of basic research in the physical sciences in the United States. The Office of Science is working to address some of the most pressing challenges of our time. For more information, please visit energy.gov/science. 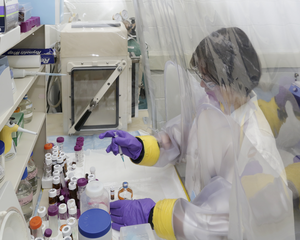 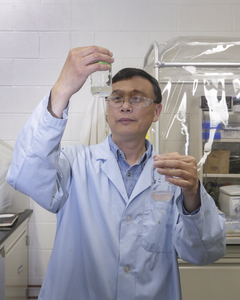