A team of experts at Oak Ridge National Laboratory is taking aim at one of the biggest challenges facing the international ITER fusion facility: turning cold gas into wine-cork-sized, solid pellets to help keep ITER’s plasma in check.

The Blanket and Fuel Cycle group in ORNL’s Fusion Energy Division is conducting research for the design and construction of ITER’s shattered pellet injection (SPI) disruption mitigation system in collaboration with US ITER, managed by Oak Ridge National Laboratory, and the ITER Organization.

“We have the infrastructure, we have the knowledge,” said R&D engineer and pellet injection scientist Trey Gebhart, who is leading the effort. “We know what needs to be looked into to provide the most reliable design.”

Learning to tame ITER disruptions, “would be a big deal for sure,” explained physicist Dave Rasmussen, who oversees the pellet injection and disruption mitigation teams for US ITER. “ITER’s plasma is at the scale of a fusion reactor that could inform future fusion power plants. It would be a great achievement to resolve this issue along the way.”

ORNL pioneered SPI technology a decade ago by building on the lab’s longtime expertise in pellet injection — systems that shoot pellets of deuterium, tritium or hydrogen fuel into the plasma of fusion devices.

SPI systems, however, don’t fuel plasma. Rather, they shut down the plasma when instabilities occur that threaten the plasma-facing surfaces of the machine walls. This process is called disruption mitigation.

Over the years, ORNL has supplied SPI systems to fusion experiments around the world. Now these experts are helping adapt that technology to the much larger scale of ITER, the world’s largest tokamak by far, currently under assembly in France.

About the size of wine corks, ITER SPI pellets will be more than 15 times larger than those used in today’s tokamaks. The ORNL team is currently testing 28-mm-diameter pellets and will soon begin testing 23-mm pellets.

“Scaling from small pellets to the ITER-size pellets introduces a lot of challenges,” Gebhart explained.

Gebhart designed a special test bed to tackle those challenges, from the frigid formation of pellets to their fiery finale.

Pellets begin as gas, which is cooled within a pipe using liquid helium at –269 degrees Celsius until it solidifies. Although informally referred to as “freezing,” the gas in fact desublimates, passing directly from gas to solid.

Desublimating deuterium, an isotope of hydrogen composed of one proton, one electron and one neutron, is much easier, however, compared to hydrogen—the preferred material for ITER.

ORNL distinguished staff scientist Larry Baylor, who leads the Blanket and Fuel Cycle group, explained the problem. As pellet gas chills inside a pipe, molecules at first stick to the inside surface and desublimate. The pellet forms layer by layer from the outside in, eventually filling the whole space in the pipe. But hydrogen, a poor thermal conductor, doesn’t desublimate as well as deuterium.

To help solve this problem, Baylor has been measuring and modeling this “condensation coefficient” for hydrogen, which previously had not been well understood.

“As the cylindrical ring of material gets thicker, these molecules no longer stick as well when they get on the surface,” Baylor explained. “They bounce off because they don't lose all their thermal energy, because of this heat transfer problem.”

The ORNL team also needed to rethink how to shoot the pellet into the tokamak. In other tokamaks, a valve based on a magnetic circuit opens to release high-pressure gas at the pellet—but magnetic circuits won’t work in ITER’s high magnetic fields. So Gebhart improved a special flyer plate valve that does function in those fields.

Shooting pellets down a precise path is another challenge. Because the tubes that direct the pellets into the tokamak will be unusually narrow at ITER, the flying pellets can deviate no more than a 1 degree from an arrow-straight path. The bigger ITER pellets will require more force to send them into the tokamak. Apply that force too fast, however, and the pellet breaks.

“You have to home in on this narrow Goldilocks spot that will get your pellet out intact,” Gebhart explained.

Another engineering challenge awaits at the other end of the flight path. By design, the pellets slam into a curved section of the tube wall at 250 meters a second, breaking into pieces. Those fragments will disperse across the plasma, cooling it down as the plasma expends energy stripping electrons off the cold atoms.

“We use a statistical fragmentation model that was actually derived in the 1940s for understanding how grenades fragment when they explode,” Gebhart explained. “Pellet material is very brittle, much like some metals.”

All of these elements help to improve the system’s performance.

“Previously, everything was just, ‘Shoot the pellet, you get what you get, and it does its job,’” Gebhart said. “Now, we are slowly learning that we can tweak it to produce better results.”

UT-Battelle manages ORNL for the DOE’s Office of Science, the single largest supporter of basic research in the physical sciences in the United States. The Office of Science is working to address some of the most pressing challenges of our time. For more information, please visit energy.gov/science. 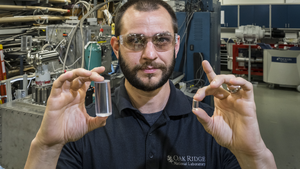